Episode 1 can be found at Amazon, B&N, Kobo, Smashwords, Gumroad, Apple, and more. 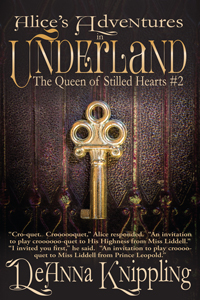 “Cro-quet. Croooooquet,” Alice responded. “An invitation to play croooooo-quet to His Highness from Miss Liddell.”

“I invited you first,” he said. “An invitation to play croooo-quet to Miss Liddell from Prince Leopold.”

“Here’s your invitation to play croooooquet.” Alice held out an imaginary invitation.

Episode 2: In which Alice meets the Queen and her son, Prince Leopold; a game of croquet is played; and an arbitrary judgment is meted out.

Episode 1 of The Queen of Stilled Hearts showed the first time that Alice met Charles Dodgson, upon his arrival at the Christchurch Deanery to take the pictures of the Dean’s three daughters: Ina, Alice, and Edith.

Alice found Mr. Dodgson, a zombie, quite fascinating, as was his story of being turned into a zombie…by no less than a rabbit!

Now, Alice is older, age eight, and awaits the arrival of Queen Victoria for a visit.*

A word of caution: sometimes the greatest of friendships are occasioned by the direst of cruelties.

*Which she actually did do, in 1856. I couldn’t find out whether Leopold had accompanied her, but he might have, I suppose.