I survived Denver Comic-Con, and all I got was a stupid Nakitomi Plaza Parking Permit! 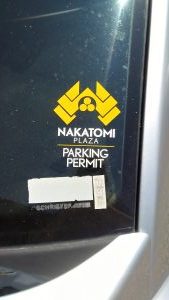 Actually, I got a few other things, but none of them cost more than a dollar.  Or were eaten before I left for home.

I was on a panel for Indie Book Publishing with Marla Bell, Lisa Manifold, and Michaela Mills.  We could have talked about marketing for hours.  One of the things Lisa said stuck with me:  “Find your tribe.”

D’oh!  I’m in several indie publishing groups, but nothing for indie sf/f, horror, or mystery.

Then came Letters Written From Hell, a pleasant sort of panel about what makes horror writers tick.  I moderated that one, and was sure to establish that horror writers weren’t nuts…or at least handled their issues better than the average bear.  That panel starred Shannon Lawrence, Jason Dias, Emily Godhand, and Patrick Hester.

We established that horror writers may be slightly weighted toward people raised Catholic (3 of 5 panelists), and that in a hypothetical novel written by all five of us, the audience greatly preferred to have Shannon as the psychotic antihero, and darling Emily Godhand writing the bad guy.  Apparently, readers like plot twists.  Who knew?  And also Patrick’s space spiders…

Okay.  I’m gonna admit that I mostly blanked this one out.  There were soooo many people and my brain was kind of on static by that point.  I remember talking about child abuse and The Babadook.  That’s about it. 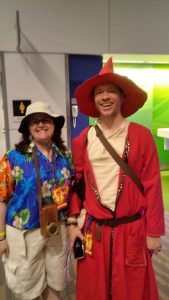 Rincewind and Twoflower from Terry Pratchett’s Discworld series.  I first spotted Rincewind from behind, circled around to check that it was a “wizzard” hat, slyly pulled out my phone, and said, “May I take a picture?”

“If you wait a moment, you can get Twoflower, too.” 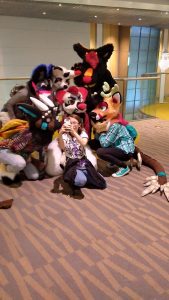 I’m not sure if these are particular furries or just furries in general.  But the girl was 100% delighted to get a selfie with them.  I couldn’t help but smile.

The first panel of the day was Creating Believable Monsters.  Matt Bille moderated.  He has a love of scientifically valid monsters that I just can’t equal.  The important thing to me is that the characters believe the monsters they face, not that the monsters could really exist.  But we discussed that ahead of time, and Matt handled the disagreements gracefully.  Also on the panel were Fleur Bradley, Veronica R. Calisto, Stace Johnson, and Shannon Lawrence.

Looking at my notes (I always bring paper to these things, because someone always makes a book recommendation that I regret not writing down), Xenomorphs are underlined twice and the word aliens has an exclamation point and a box around it, which cracks me up.

My favorite monsters were:

Shannon Lawrence pointed out that all my monsters were either cannibals or were known to have eaten people, and that I should probably figure out why that was.  (I had mentioned earlier that my short story collection A Murder of Crows: Seventeen Tales of Monsters & the Macabre is full of cannibalism.)  But I already know the answer.  I’m a foodie; everything wonderful is delicious and everything terrible is rotten.  My stories always have someone vomiting in them, because that is the worst.

Then came Not Just Novels: Writing Different Lengths, where we talked a lot about short stories and the mysterious Novella and Novellette lengths, where nobody’s quite sure what they’re trying to accomplish (even writers).  The panel was moderated by Shannon Lawrence, and included Fleur Bradley, Jason Dias, Stace Johnson, and Carolyn Kemp, who was wearing a wonderful gothy steampunk costume that made me realize I wouldn’t recognize her to see her again.*  I become easily confused when people change their hairstyles, and I can rarely recognize people from their Facebook photos if they’ve done their hair differently.  At all.

Which is kind of ironic because I don’t keep my hair the same.  I have a bob, but it needs help; right now it looks like generic Mom Hair, so I have it pulled back in a ponytail.

*I looked her up online in her civvies.  I think I got it. 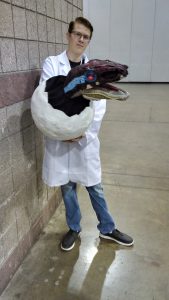 This gentleman seemed to be completely unaware of the possibility of this young and very hungry dino baby turning around and eating his face. 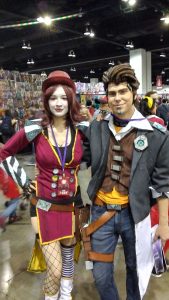 Mad Moxxi and Handsome Jack from the Borderlands series.  I reeeeaaaallly wanted them to do the voices, but they couldn’t do them.

I met Paul Roman Martinez, who is doing a cover for an anthology that Jamie Ferguson and I are putting together–more news on that soon 🙂

I helped distract a baby on a changing table.  MOM powers took over.  He was like “Imma roll off this table,” and his mom was like “Oh no you won’t.”  So I stood there and distracted him while costumed characters walked behind us.  Which makes me more interesting then Harley Quinn, at least according to one six-month-old kid.

I stopped for lunch at a retro diner called Sam’s No. 3, where I sat at the bar with two people who spotted my badge and wanted to know if I was from that comic-book thing.  I told them that it was a farm & home show for nerds.  “What about all those costumes?” “It’s really just like supporting your favorite sports team.  Just for fun.”  I feel like I fought the good fight for nerdery, but did not win any wars.

I only had one panel on Sunday, the Black Mirror and the Evils of Technology Panel, which I moderated.  I assumed it was at 5:30 in room 405, because of course I did.  It was at 4:30 in room 605, which I checked at about 2:30, because I’ve lived with myself long enough to have learned to double-check things.

Now, I like the show, even though it also makes me miserable, but I only started watching it recently; my husband Lee told me that I’d hate it (based on the first episode).  But I had volunteered to moderate panels, damn it, and there I was, moderating a panel that was now no longer on the 400 (writer) track, but on the 600 (general fandom) track.

Which meant that almost everything I had prepared was no good.

Fortunately, my panelists were excellent.  They were Shannon Lawrence, Veronica R. Calisto, Stace Johnson, and David R. Slayton.  They adjusted on the fly in front of what looked like several hundred people.

Erk…but it was the best of the panels I was on, in my opinion, because everyone there was so filled with energy and delight–over a rather horrific show. 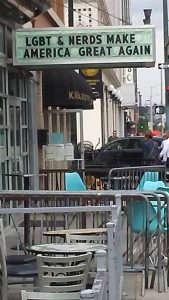 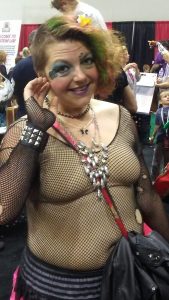 Delirium, from Sandman.  It was too crowded to catch her shoes, which didn’t match.

You may have noticed that a lot of the panelists were the same–that’s because Shannon Lawrence did all the organizing to set this up, which turned out to be a lot more organization than she expected. Kudos to her.

Going into Denver Comic-Con this time, I carried the attitude that the con was just going to make me miserable, and I wasn’t sure I wanted to do it again.  I had a great time, though, and feel like I learned quite a bit by observing people and what they loved, from their costumes to what they carried around with them.  I may write something up about that later.  But now I feel like I’d like to do this again, if I have the opportunity.  And I recommend going if you have the chance.