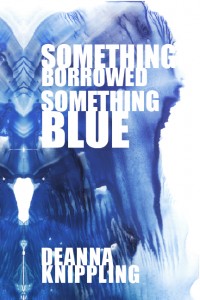 “Something borrowed, something blue. Something terrible will happen to you.”It’s a bad neighborhood in Detroit, the kind of place where abandoned houses get stripped, then taken over by squatters, then burned. But it’s about to get worse.Across the street is a white van with those words spray-painted on the side in blue. It pulled up in the middle of the night without a sound. The windows are solid black glass. And it’s watching you…

(For ages teen and up.  Horror.  Some language, gore, no nudity.)

And here’s the opening of the story…

“Something borrowed, something blue. Something terrible will happen to you.”

Someone had gotten the rhyme all wrong, but I didn’t feel like correcting it. Instead I slurped my coffee and pretended that goosebumps hadn’t risen all along my arms. The side of the white van parked across the street had been painted with bright blue spray paint on the side facing my house. The paint had been sprayed slowly and carefully, which meant that there were blue drips all along the bottoms of the letters. It was like looking at blue blood splatter.

I hadn’t built my home into a fortress because it made me happy. I wasn’t some kind of pathological doom-prepper. It was just that the bad parts of Detroit had crept up on me. So I did what I had to do: bars over the windows, an alarm system, security doors, and a couple of other surprises, like a loaded shotgun just inside the front and back doors.

I was on the neighborhood watch, I helped clear out squatters from abandoned homes, I worked my rotation at the soup kitchen. I might have set a fire or two so the city would pull a couple of places down.

I lived on a couple of blocks that were an island of sanity behind the lines.

The driver-side and front windows were tinted pure black. Not legal in Michigan, I knew that much. And as for a side mirror, forget about it. There was nothing but a couple of trailing wires where it had been—and a nasty scrape down the side of the driver’s door.

It felt like, I don’t know. A serial killer or something. It felt like any second now, one or both of the side doors were going to slide on open and a clown with sharp teeth was going to step out.

The coffee was no good. It landed like a mouthful of grounds in my stomach. I could feel bowling balls rolling around down there,grinding it up.

I spat off my front porch and went back into the house. The newspaper was lying at the bottom of four cement steps in the bright sunlight.

I’m supposed to be retired now. I used to be an electrical engineer, worked at an auto plant in Detroit. I took an early retirement and considered myself lucky. Now I don’t. I replace about six or eight windows a year. Sometimes I see shadows moving across the back yard at night. Inside the fence.

The scary part is that I’ve got a rifle that leans against the bedroom window in the back of the house. More than once during a hot summer night I’ve left the window open and turned out the lights,then sat by the window, waiting.

I’ve picked up the rifle a couple of times. I’ve aimed it once.

Through the scope the shadow turned into the figure of a boy dressed in black. Black clothes, black ski mask. He looked like a goddamned ninja. He leapt over the fence, landed without a sound just past my rosebushes, and floated across the grass of the backyard.

He seemed to spring up over that other fence like a deer. He jumped forward, put a hand on the top of the boards, and was over just like that. Again, without a sound.

I put the rifle down. I was shaking.

My wife, Alice, died last year. I was through the worst of the grief, or at least I thought so. But the house was lonely. I thought about getting a dog, but it’d be up all night barking at noises, and who could blame it?

Living in Highland Park was no life for a dog.

It was no life for me.

I thought about getting out. Moving. Be closer to one of my two kids or something. But I always got the feeling—especially this last year after their mom had passed of breast cancer—that I wasn’t…I can’t put my finger on it. I wasn’t right for the job of Grandpa. I kept saying things they didn’t like. And then when I kept my mouth shut, they didn’t like that either. I couldn’t win.

So I stayed at the house and wrote my stories: zombies and post-apocalyptic desolation. I had the source material at hand, so why not? I had always had too much of an imagination, that’s what they said when I was in school. Doesn’t pay attention. Spends too much time daydreaming. Gets good grades but doesn’t apply himself.

I can’t say that I was a famous writer or anything. I sure wasn’t “literary.” I was just an old fart typing up the adventures that I’d had, or that I wished I’d had, back in my younger years. Wars, explosions, sneak attacks, betrayals, falling in love, falling out of love, getting stabbed in the back by your best friend,epidemics, rogue computer intelligences, spies, mutations, vampires,zombies…good times.

I would put my stuff up for sale on a couple of online bookstore, then take Alice out to a good dinner every month on the proceeds. I counted myself a happy man.

Until Alice passed, and things started to close in on me.

She wasn’t one of those women who light up a room. She wasn’t generous, or helpful, or even a good cook. But when she was gone it was like all the space went out of the house. She held up the walls. Kept me from falling down.

I had nosed around with the kids about moving into a “retirement community.” I wasn’t old enough for a nursing home, but I was too old for a new house. I had mowed lawns and put up storm windows and repaired roofs and roto-rootered enough plumbing for about a dozen lifetimes.

The kids had liked the idea of me moving out of the old place, as long as I wasn’t going to live with them. “Somewhere safer,” they said. “Somewhere that you’ll have someone to talk to.”

Somewhere that I wouldn’t be surrounded by guns and talking to myself all damn day. That, too.

Some nights, the wind howls through the suburbs and rattles the windows, especially in winter. Back when Alice was alive, it felt like there was nothing that could get to me. I might feel a little cold air leaking in around the cracks, so to speak, but that was it. I just burrowed down into the covers and rolled up against her backside while she snored, steady as a buzz saw.

Some people might be cut out to be hermits but I ain’t one of them. I could feel the wind blowing through the glass these days.

When someone smashes the glass in your soul, it’s harder to replace.