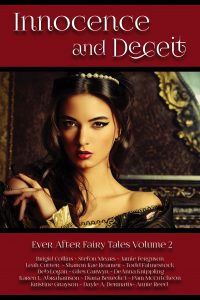 Ever After Fairy Tales #2: Innocence and Deceit

Cinderella’s not so innocent, but neither is Prince Charming.  Innocence and Deceit, the second volume in the Ever After Fairy Tales anthology series, contains fourteen fairy tales retold, reimagined, and reinvented.  Enter the magical, unpredictable, wonderful world of fairy tales!

Contains my short story, “Dr. Rudolfo Meets his Match,” an Aschenputtle retelling (quite close to Cinderella!).  The editor, Jamie Ferguson, said that she got a lot of Cinderella retellings for this volume and decided to just go with it.  We writers, being much like cats, did not go in the same direction.