Available through June 10 here.  Includes my book, Alice’s Adventures in Underland: The Queen of Stilled Hearts.  (Book 2, The Knight of Shattered Dreams, will be released May 31!) 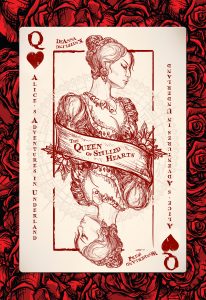 “Curiouser and curiouser!” cried Alice; “I’ve become one of the undead!”

A horrible plague has spread across Britain, infecting some of its citizens with zombieism. The British, however, have not given themselves over to upset, but have discovered a method for controlling the plague: a serum that halts the infection in the living, and restores self-control (most of the time) to the undead.

On one golden afternoon, gentleman zombie Charles Dodgson tells Alice Liddell and her two sisters a story, the tale of how dear little Alice (who is rather a troublemaker) comes to the mythical homeland of the zombies, Underland, and her adventures there.

Or will Mr. Dodgson, as the story progresses, consume them all?

The Queen of Stilled Hearts begins the story of Alice’s Adventures in Underland. It is continued in the second book, The Knight of Shattered Dreams, in which a tale is told of a certain looking-glass…

For older teens and up. Some gore and violence–not recommended for younger readers.