Alice’s Adventures in Underland: The Queen of Stilled Hearts #4

Now available at Amazon, Barnes & Noble, Smashwords, and Kobo, with Apple not yet up.

Ep #1: blog, Amazon, B&N, Kobo, Smashwords, Gumroad, Apple, and more.  Free at the blog, Kobo, and Smashwords links; the others will follow. 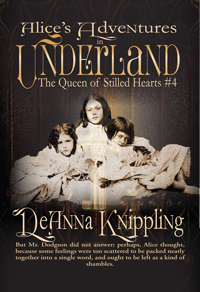 But Mr. Dodgson did not answer; perhaps, Alice thought, because some feelings were too scattered to be packed neatly together into a single word, and ought to be left as a kind of shambles.

The story continues.  Mr. Dodgson, under the watchful yet ignorant eye of his friend, Mr. Duckworth, shreds society as a kind of madhouse.  Alice begins to suspect that this Underland lies all around her…

I ask you to kindly take a look at Episode 1 if you’re interested (it’s free, except on Amazon and B&N, because that would be too easy.  [Glares at her distributors]).

Update:  Ah!  In case you’re curious, the picture shows Edith, Lorina (Ina), and Alice, as taken by Charles Dodgson in 1859.