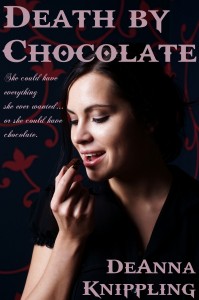 She could have everything she ever wanted…except chocolate.

Ellie can’t see it, but she’s a saint. A good girl who takes care of her Grandie at the nursing home, recycles other people’s trash, and worries about getting her loans out on time so she doesn’t inconvenience her customers.

It’s too much for the Devil to resist: is Ellie good, or is she just boring? He makes her a deal. She can be thin, pretty, and immortal…as long as she doesn’t eat chocolate. Ever. If she does, she’s going straight to Hell.

Except Ellie doesn’t like chocolate, so he better find something—or someone—better to tempt her with. Then the bad boy at the top of Ellie’s sexual bucket list appears. Coincidence? Probably not.

Ellie was a good girl, it’s sad to say. A heart full of patience and kindness and love. And the only person she had to slather it on was her Grandie, in the nursing home.

She was there when the Devil found her, at Sunnyside Oaks, on a dark and stormy night in late October, when the leaves skittered like spiders on the sidewalk, and the half-bare branches lashed under the wind, the eerie glow of streetlights flickering like glaring eyes through the icy mist.

Ellie fed Grandie, who sat in one of the big recliner wheelchairs, the kind with a table across the top and cushions from head to toe, to prevent bedsores. It was six; everyone else had eaten and was being rushed to bed by sullen high school kids whose ideas of what was going to happen to them for the rest of their lives got more bitter by the shift. Grandie was down to her go-juice—applesauce and prunes—when the leaves ticking against the windows started to screech against the glass.

The Halloween decorations taped to the insides of the windows shimmered and scowled, their cute pumpkin faces and black kittens in purple hats twisting into the faces of her former classmates, laughing at her, clawing at each other, making bad gestures toward her, murdering the ghosts.

Grandie moaned, and Ellie dropped the plastic cup of go-juice in her lap: her eyes had rolled back into her head, and the whites were bright pink with blood.

“Grandie? Are you all right?”