Attack of the 50-Foot Sushi Monster on sale!

This weekend only!  Get “Attack of the 50-Foot Sushi Monster” FREE at Smashwords using coupon code SX86U.  More sushi than you can shake a stick at! 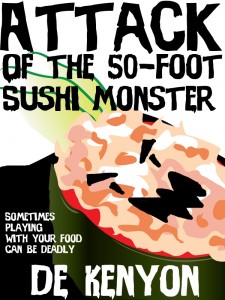 Attacl of the 50-Foot Sushi Monster

Sometimes Playing with Your Food Can Be Deadly

When Cat holds her birthday party at a sushi restaurant, she doesn’t expect her meal to attack!  How can one girl defeat a 50-foot-tall monster made out of raw fish, rice, and seaweed when stuffing her face is not enough?