Alice’s Adventures in Underland: The Queen of Stilled Hearts, Ep. #5 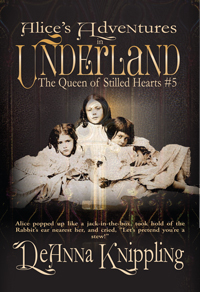 Alice popped up like a jack-in-the-box, took hold of the Rabbit’s ear nearest her, and cried, “Let’s pretend you’re a stew!”

Now available at Amazon, Barnes & Noble, Smashwords, and Kobo, with Apple not yet up.

Enter Mr. Charles Dodgson:  one of the chaste Dons of Oxford, married to his mathematics.  He charms Alice and her sisters, often taking them on walks and boat rides (chaperoned, of course), and telling them jokes and stories. He is twenty-four when he first meets them.

Episode #5: The story continues.  The story-Alice behaves in a less than ladylike manner, and meets a Cat.

If you would, kindly take a look at Episode 1.  It’s free!  Except at Amazon. Because.

What to write next?