Now at Smashwords.com, Barnes and Noble, and Amazon.com.

This weekend only!  Get “Zombie Girl Invasion” FREE at Smashwords only using coupon code MF89W. Act now; zombies are waiting for your click! 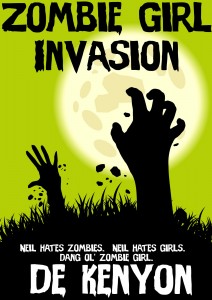 Neil hates zombies. Neil hates girls. Bleah. But then the zombies invade, and he has to save the zombie girl from being eaten…by other zombies!

Neil hated zombies.  I mean, really hated zombies.  If he ever saw a zombie, he would tear the refrigerator off the wall and smash it over the zombie’s head, so it squished out the bottom like a packet of ketchup.  Or shoot it with a shotgun, right the head, so its head would explode like a tomato.  Or burn it up with a flamethrower, or chop its head off with a samurai sword, or lasers.

Putting it all together.