Pick up a free copy this weekend only at Smashwords using coupon code PU29V. 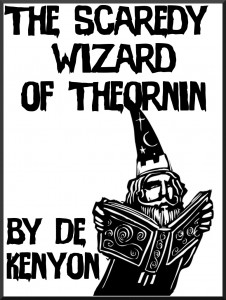 Cormish won’t stop bullying Aster until she steals the wizard’s spell book for him. But does he have to breathe down her neck the whole time? It takes more than five minutes to break into a wizard’s house, especially when it’s raining so hard, no matter how mean Cormish is.

Bullies. Astra knew that she didn’t have to do what Cormish wanted just because he knew that she’d stolen a bunch of stuff from the smokehouse by the river. If he told on her, all her parents would do would be to give her a stern talking to: it wasn’t like they’d be surprised that she’d stolen something. Again.

But from the way Cormish grabbed her arm, so hard that she was sure it would leave bruises, she knew that if she told him off, he’d find something worse to threaten her with, until she did do it. And it wasn’t like she could hide from him, not in Theornin.

So she told him she would get into the wizard’s house somehow and steal his spellbook, but insisted that it would take more than five minutes to figure out how to do it, so could he please stop breathing down her neck and glaring at her already? It was distracting, and if ever there was a time she didn’t need to get caught, it was this time.

So he climbed back up in his wagon and said, “I know where to find you,” slapped the reins against the horses’ backs, and rode off through the mud toward the bridge. The rain fell on his heavy, oiled cloak, making loud pattering sounds.

When the rain fell on Astra, on the other hand, it was perfectly silent, because she didn’t have a cloak at all, just her clothes. She shivered and picked her way through the straw on the wet ground, heading home. Someday, someone should do something about Cormish, but they probably wouldn’t. It was just easier to pretend he didn’t exist, most of the time, even for the adults. That was bullies for you.

Most people were either at home or at the tavern. Astra’s father was probably at the tavern, trying to get work for the coming summer that didn’t involve bending over so much. Less working in the fields and more driving a cart, Ma said, would be the thing for his back, which he had hurt this winter when a horse kicked him. His hip had swelled up all blue, and when the swelling had gone down, he limped when he walked and complained about how much his back hurt him.

After her father had hurt his back, her mother had started asking Astra what she expected she would do with the rest of her life, steal fruit for a living? and other sarcastic questions that made Astra angry but only showed that her mother was afraid of Pa not being able to work. One night her mother had apologized for saying such mean things and explained that Astra was going to have to start working in the fields the next summer, and her mother, too, if her father’s back didn’t get better.

Astra’s Ma was probably at home, taking care of the babies. What would happen to them, if her Ma had to work in the fields, Astra didn’t know. Her mother had burst into tears when she’d asked the one time, and she hadn’t asked again.

Astra slogged through the mud and the rain and cursed herself. “I should have told him he’d have to pay me,” she said. “You want stuff stolen, you have to pay for it. The harder it is to get, the more you have to pay. And this is going to be hard. I got to start bringing money home for my family.”

Maybe she could run away to a big city, like Newmarket, and be a thief. She’d change her name and send money home to her parents.

According to everyone, even Astra’s mother, the old wizard used to help people. He would heal the wood-choppers’ wounds, and sell potions that you could use to make servants out of mud, and put out fires, and get rid of beetles when they got into the crops. Astra’s mother had had to carry baskets of bread to his house every week, as payment for putting out a fire and some other stuff. One time he’d stolen a wart right off the bottom of her foot, and paid her with a piece of paper with her name on it. She still had the paper, rolled up tight inside an oiled cloth and tied with a blue ribbon. The old wizard had made her laugh all the time, she said.

The new wizard didn’t do anything to help anybody, though. So he had to pay for his food, just like everyone else.

Cormish, who had wanted to be a wizard since forever but the old wizard told him that he (the wizard) was too old to go around trying to train apprentices, and had waited until the wizard had come in a hired cart with crates and crates of mysterious and breakable things packed in straw, and asked to be the new wizard’s apprentice.

The new wizard had taken one look at him and stepped backward over a crate, tipping it over and causing things inside it to smash. Astra had been there, or so her mother had told her, only she’d been too small to remember.

Cormish had offered the wizard a hand back up, but the wizard had rolled to the side and backed away even further, as though Cormish had swung a fist at him. For some reason, Cormish (who was a bully) had terrified the wizard, and he hid every time Cormish had tried to ask him since then. They weren’t supposed to, but all the kids called him “the scaredy wizard” when he wasn’t around.

Finding the Beginning of Your Story