The Man Who Ate Gene Wolfe: A Story 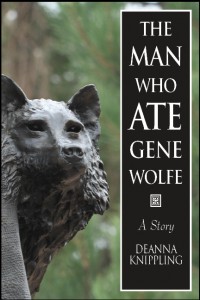 When I was a boy I lived in England and considered it the most ordinary place in the world.  It was America that I was fascinated with, if you can imagine that.  I thought that you could find anything in America.  Did you know that the Jolly Green Giant lives in America?  Most of you do not, because you are used to that kind of thing.  Everywhere you go in America, there is something wonderful to see.  Here you have creatures like the Blue Demon Horse, which fell on its creator and killed him.  In England such a thing never would have happened, because nobody would have thought to build a Blue Demon Horse in the first place, and it would have been destroyed if it had killed the hand that made it.  The English take our beliefs very seriously, in a way you Americans do not, and we are the poorer for it.

Being bored and growing up in England as I did, I retreated into my imagination, and because I did not grow up with video games or the Internet, I instead turned to reading books and comic books in my spare time.  Later on, I was also very interested in music, but that is another story.

I read many authors, and, when I found them especially good, I would read everything of theirs that I could, from the first words they had written until their last.  I would beg Mother for pocket money to buy books and comic books, which were a great deal cheaper then.  Sometimes I wonder–but, again, that is a different story.

I could tell you the names of dozens of authors that I read from beginning to end, but today I wish to speak of one particular one.  I think you know of whom I speak.

The first book of his that I read was a book with which I quickly became obsessed.  It is unnecessary to name the book; the fact that you are here, today, tells me that you, too, have had a similar experience, with one book or another of his.  Perhaps it was not even the first book of his you read; his are not books to simply read and  set aside, if you are to discover any particular pleasure in them.   All of us know of someone who had read one of his books through once and taken nothing more from it than a confusion of images, a kind of shimmering, incomprehensible dream.

But to read one of his books a second time–then you have begun to enter into the spirit of the thing.  One of his great gifts has been to show us that everything has meaning.  Perhaps you agree with him on the source and implications of that meaning; perhaps you do not.   Nevertheless, we had never been before given such a gift by a writer–unless it was in Chesterton or Borges, or some obscure French writer of whom no one has heard except the French and other, even more obscure writers.  Everything has meaning.   Think of it.   When someone is born, they are born already imbued with significance; every death has a purpose.   Meaning is not the same thing as destiny; otherwise, there would be only one story, and anyone who has ever written knows that all stories could have just as easily gone in a different direction.

God sees–or, rather, reads–the fall of every sparrow, as well as every sparrow that never fell.   Perhaps Heaven is merely the best of all worlds, and the reason for every suffering we experience is –but that, too, is a different story.

At any rate, although everything has meaning, it does not necessarily follow that any given event only has one meaning.  An event may have many meanings:  it may, for example, juxtapose Through the Looking-Glass and the idea of a technological crutch; it may combine Greek mythology along with South American.  And, while some would argue because of the transient nature of what we read into one of his stories–some of the earlier interpretations now seem dated indeed–I would say that the meaning itself is fixed, and it was never intended for our vision, but the vision of God.

What that word means, I cannot pretend to know.  But I learned to believe in it while reading that first book of his, not for the first time, nor even the tenth, but upon further study, in which I dissected the story, character by character, scene by scene, reference by reference.  The more deeply, the more fully I read, the more I realized that the meanings that I has so assiduously gleaned from his stories before were only flimsy veils before the true meaning of his story.

Did I understand the true meaning of his story–then, or ever?  I did not.  But I glimpsed it.

This is not true.

I mentioned earlier that I would read certain authors from beginning to end, from first word to last.  He has been one of them, and has perhaps been the greatest influence on my work, or at least an increasingly important influence on my work.  I still cannot say that I can understand his stories, but I feel that I can characterize them.

In consuming his words thoroughly and repeatedly, as I have, I feel that I have consumed the man himself.  Not literally, of course.  But I have, within myself, created a kind of icon of him, an eidolon.  A kind of small god, of the genus mentoris, an irreducible belief in the man himself.  My soul, despite not being any larger than it is, contains his, as well as the souls of other writers and mentors I have known.   If I were a topologist it would be an interesting conundrum–how something only so large can contain something, in toto, larger than itself, but, as I am a writer, I am used to containing worlds within my imagination; I am used to the map being as large as the territory, if not larger; I am used to working with infinities on a regular basis.

And so it is with confidence that I can say that his stories are as accurately read by the first-time reader as by the one who reads them for the thousandth:  a kind of shimmering, incomprehensible dream; that is, a direct experience of Mystery itself, which contains itself, and yet is larger than itself.  The more we discover his stories, the more we are lost; the more we consume of him, the more we are consumed.

And that is why I came to America, in the end.  Because of the monsters I expected, and have not failed, to find.

Alice’s Adventures in Underland: The Queen of Stilled Hearts #1