Tales from the Pirate Moon, Episode 1: The Coffin of Infinite Time

Now on sale at Smashwords, Amazon.com, and Barnes & Noble.

Rescue the Queen, defeat the good guys, and live life to the fullest by using this coupon for a free copy this weekend only, at Smashwords:  PJ87R 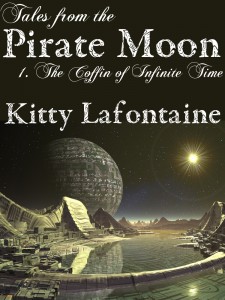 Tales from the Pirate Moon, Epsiode 1:  The Coffin of Infinite Time

Jackson, a human bounty hunter, wants to bring Miklos Orosz to justice, dead or alive.  Indigo Grey, owner of the Hundred Hive bar on Pirate Moon through right of conquest, wants to escape the life she’s built for herself, even if it kills her.  Miklos, small-time smuggler, wants to be a pirate whose name lives on in infamy wherever tales are told…first to attack, last to die.

When the Hive tries to take its revenge on Indigo, unleashing a power that will trap her forever, Miklos sees the chance to take the power for his own, either destroying or saving her in the process, and Jackson sees his chance to trap Miklos for his own…until the Hive unites them all.

Episode 1:  The Coffin of Infinite Time begins the tale.  Look for Episode 2 in July 2011.

Indigo reached across the masticated-fiber-and-cement balcony to turn her fingers over and over in the starlight. The Hundred Hive buzzed with voices across its twenty-seven levels, full of aliens and humans, none of them attacking each other for the moment.

Noon, with its bright, dust-specked column of starlight magnified through the upper lens, always seemed to bring a moment of peace.

But no more than a moment. The moon Turul shifted underneath them, something heavy (probably the door) crashed behind her, and a quiet puff of air passed by her, making her hair dance on the breeze. Glass smashed somewhere below her as the needler dart that had almost hit her crashed into another level.

“Nobody move, or I’ll kill you all,” a man yelled in a deep voice filled with quavering bravado.

Indigo sighed contentedly and turned around. She’d been so bored this morning.

The reason for the new pen name is that this is a story within a story–the characters within it show up inside YOUR SOUFFLE MUST DIE as part of a movie within the story.  So here is the book that will become the movie that will show up in a silly cooking mystery.

It’s also a present for my brother Andy, who, when I told him I was broke, said, “That’s okay.  The best presents have always been books.”

Indypub: The Power of Patience