More changes have been happening from The Artist’s Way.

This is supposed to be the week where I feel more connected to higher powers, to my creativity, to my personal dreams.  I’m supposed to feel like…the work just passes through me, rather than I’m “working” on it.

I am not there yet.  I cut loose on a 2K passage the other day and easily hit top speed…but I didn’t have a sense of surprise.  It was a great deal of fun, but I was left with a sense that I hadn’t written anything worth keeping.  I don’t know whether it’s because I have no idea what’s worth keeping or whether I’m looking for an experience rather than a good story.  I kept going, “But I didn’t discover anything” and “I didn’t feel like something outside me was writing this.”  Which has been pretty much par for every other scene I’ve written so far: I go, “Huh.  So that’s why the characters are like that; I feel like someone else is doing this, not me.”  I really didn’t get any insight into the characters in that scene.  Disappointing.

So.  I’m going to head back into the story in a few minutes, and see whether things have changed.  I’ll probably slow down, rather than just letting the words blorp out of me, because it’s the slowing down and making sure I have the five senses in that’s led to so many insights previously in this story.  I may just be tripping myself up.  I’ll have to see how it goes.

Anyway, instead of going through what I’m supposed to according to this chapter in The Artist’s Way, I’ve been feeling more powered.  Not powerful, not empowered, just powered.  Like, I have more of a reservoir of juice with which to go, “And I give a shit because…?”  and just do what I want instead.    “Hm.  I believe I shall take the day off to pack for an emergency evacuation,” I said yesterday.  And then I had to follow that statement with, “which is probably totally useless and unnecessary,”  because I didn’t have enough stored up in my power reserves to just say, “I wanted to, nyaa.”  Apparently, not giving a damn about what other people think is something you have to build up reserves in.  At least, for an introvert like me.  So when people say, “You shouldn’t care about what other people think,” well, they’re full of shit.  It’s a skill, and you don’t develop it by having people gawp at you and act like you’re just supposed to be able to do it naturally, you retard.

I have used this power…to eat when I feel hungry, rather than trying to sqeeze out one more little bit of work.

I have used this power…to dick around and blog.

I have used this power…to stay updated on the fire instead of knuckling down.

It seems like this power is currently in service of things other than writing.  But.  I promised myself I’d give an honest go at the ideas in this book, and they haven’t done me wrong so far, even the don’t-read-stuff week, so I’m trying to trust a little bit.

However, I feel like I’m not functioning properly.  How will I stay motivated to write if I don’t PUSH, if I don’t FORCE, if I just do what I enjoy? If I don’t work under a blind Midwestern work ethic?  If I have no discipline, how will things happen?  –Maybe there will be a discipline, but if there is, I have no idea what it will look like.  I have previously operated under the idea that in order to have value as a writer, I have to challenge myself.  Which sounds great.  But.  Challenging yourself, setting goals–these aren’t a sense of connection to to higher powers, to my creativity, to my personal dreams.  Goals are the opposite of daydreams, and I keep having to let myself daydream this week: one shiny, flighty little image after another.  Is it that I’ve just gone too far into the GOAL side of things, and too far away from DAYDREAM?  How do people even function when…there are no rules, which is essentially what a goal is?  When I see people without goals, I see slackers.  I see people who don’t do anything, who settle for stupid shit instead of what they really want.  Who go, “Where did the time go?” and “I’ll never be able to X, so it doesn’t matter what else I do, anyway.”

And yet I get these little flashes of insight that say that maybe this week isn’t a waste after all.  I’ve been trying to come up with an epic fantasy idea for a while.  I love reading epic fantasies, yet I don’t actually write them, which seems stupid.  But nothing seems to click.

One of the exercises this week was to write down five films that I love, then try to find the patterns in them.  I wrote down The Princess Bride, Goonies, Kung Pow, Kung Fu Hustle, and RED.  –These aren’t supposed to be OMG THE DEFINITIVE LIST or anything, just five movies you love and can jot down quickly (presumably to show what’s on your mind).  The patterns I pulled out (and you could see others) were: humor, meta, adventure, fantasy, wonder.   Different forms of love.

I’ve been trying to brainstorm…serious, non-meta, adventure fantasies with strong philosophical elements (but no actual meta).  And no friendship, no romance…

It may be that I’m just not cut out for that kind of thing.  I may have to concede that…if it doesn’t have humor in it, I may not be able to finish it, as a longer work.  Maybe what I need to do is write the fantasy version of Every Which Way But Loose* or Cannonball Run.  I grew up on Scooby Doo and The Dukes of Hazzard and Eighties crap like that. Come on. My brain is @#$%^. 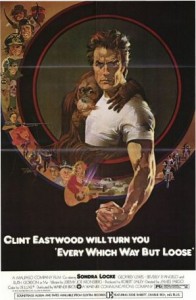 Put a sword in that fist and we’re good to go.

But…I think about being a writer, and I want to write Epic Fantasy That Is EPIC, not Smartass.  Not that this isn’t the first time I’ve had to abandon ideas about writing.  I mean, I started out as a poet (and got pretty good at it, nicely controlled dissonance being perhaps my specialty).  And I’ve always wanted to write Serious Fiction.  Because that’s what defines a Real Writer, right?  Buh.  Now I’m trying to fight the good fight against writing nothing but farces for the rest of my life and trying to assert that I Really Can Write Horror, and that I Really Can Write Serious Fantasy.  Instead of writing what’s really inside me, which…may be Smartass Shocking Pulp and Smartass FairyTalesque and Smartass High Epic Farce?

Getting to this point chokes me up today.  I mean…what if it was okay to write what I really wanted to write?  What if it was okay that I’ve been writing other stuff all along, because I had no idea what I really wanted?  What if it’s okay if what I really want changes? What if I can go, “It was all meant to be”?  And, “Learning how to write this farcical romance that you’re working on that makes no sense to you whatsoever and makes you horribly uncomfortable to think about when you’re not writing might be the best thing you’ve ever done for youself”?

It hurts, because…part of me is saying goodbye to something I thought was a dream, but was really just a goal slapped over top of someone else’s idea of success.  I have to mourn, because it hurts.  But I also feel hopeful.  What if…  What could I write if… Wouldn’t it just be a crackup if I wrote…

So.  It’ll probably turn out to be a useful week, even if I’m not yet at the point where I can get out of it what was intended.  Either that, or I’ve been reading too much Terry Pratchett this month.**