Right, this is a ramble.  I was going to put it up on Facebook instead, but…lemme get to that.

I wish I’d been posting about this kind of stuff more regularly, because now I have like this huge stack of thoughts, and it feels like to have the last thought make sense, I have to explain all the rest of the thoughts.  Maybe that isn’t the case.  At any rate, I’m going to justify this loose exploratory ramble by noting that I’m posting this on a Saturday.

I’m starting to see some weird generational things about the idea of selling your stuff.  People my age and older got raised to believe that there was a split between people who made stuff (from blue-collar workers on an assembly line to fine art) and the people who sold stuff (salespeople).

There was a real split there, a belief in almost a right-brain/left-brain duality.

So now that we, as indie writers and publishers and all that, are trying to do both sides of this stuff, it feels like we’re doubling our work.  My guess is that a couple of generations from now, that won’t even be an issue; it’ll feel like it’s one and the same breath.  A lot of the process of selling stuff will be less exclusive (bookstore-like) and more automated (Amazon-like).  There will be jobs lost in the sales arena, not because people won’t be selling things, but because the makers will be more likely to be sellers, and the consumers won’t have a lot of problem interacting with them either as makers or sellers.  We’ll be excited to meet our favorite authors–not gobsmacked/flabbergasted–because we, too, will be people who make and do amazing things.

(Or maybe that’s just my dream, more people doing interesting things instead of pushing paper.  Not that contributing to a larger effort isn’t valuable.  But a lot of time gets wasted, a lot of lives.  Our important work–raising families, making things that interest us, understanding the world and sharing it with others–gets taken for granted, and weight is put on meetings, paperwork, routine.  Meh.  That’s my hope and my bias here:  less meh.  I forget where I read it:  but I’m loving this theory I heard that the more valuable your job is, the less you get paid…because “job satisfaction” is part of your pay.)

I really hope that kind of thing goes away, as more people make things and get used to the idea of spreading them through the world.   But for now, people (especially my age and up) have to think in terms of duality:  creation brain and marketing brain.

I focus more on creation brain.  I make stuff.  I shed content.*  I know how to package up that content pretty damn well.  And I get better at making and packaging and presenting as I go along. 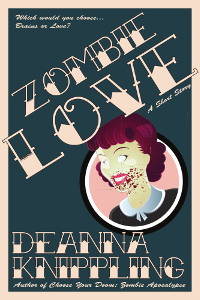 However, I was talking to Becky Clark last weekend about marketing stuff and I kept saying that I don’t get marketing stuff…until we went to lay out our talk about indie publishing, and we kept getting in arguments over which thing went where.

I said figuring out your genre was marketing (and thus her job).  She said it wasn’t.  I said cover design is marketing.  Huh-uh, she said.  Blurbs?  Nooooo, that’s creation, she said with this puppy dog look on her face.  In the end we agreed to disagree, and while I think we’re having this talk organized as if there were a difference between creation and marketing, the real split is “stuff I want to talk more about vs. stuff Becky wants to talk more about.”  We’ll play to our strengths rather than to some kind of purity of concept.

My point being:  there really isn’t much of a difference between making something and selling it.  We’ve just decided there is, by pointing at the far ends of a spectrum instead of the huge range in the middle.

BUT.  One of the things that came out of our discussion was this idea that, if you’re going to be an indie writer, the main thing you gotta do is maintain control over your work.  (Side note: something that made me laugh out loud:  realizing that big publishing is just another arm of indie publishing, one tactic in an ocean full of them.)

This is simple to say but crrrrrazy in practice.

For instance:  not putting this post up on Facebook.  Oh, I’ll post the link to Facebook.  But I am not going to leave all this good stuff on someone else’s property.  I shouldn’t be leaving all this good stuff on someone else’s property, anyway.  I was talking to Becky about it, and I (rambling as usual) mentioned my friend Dave Hill:  he rarely puts anything up natively on a social media site.  He’s always putting up stuff that leads back to his blog.  Unless it’s a conversation–and then he uses social media to socialize.  Every time he mentions how his blog’s doing, how long it’s been up, etc., he has a solid block of followers.  He has a sales platform to be envied.  (Now, if I could just get him to put up some of the books he’s been writing as ebooks for sale…or maybe raising money with his comics podcast…)  Anyway, I decided that in this respect, I should be more like Dave.  I should keep control over my content.

For example, I’m writing a line-by-line analysis of Gene Wolfe’s “Fifth Head of Cerberus” on Twitter.  Why am I not doing that here?  I bet most of the people who come here haven’t the slightest idea that the airhead who writes about murderous bunnies for kids is obsessed yet usually overwhelmed by a guy who doesn’t think twice about putting the midpoint at the end of his books so you have to read the damn things twice.  (Guess what?  There’s a huge Alice reference in Fifth Head.  So cool.)

Another part of marketing brain that we creators struggle with:  “content isn’t a virgin.”  I’ve had people ask me:  “If I put something up for free, can I also sell it myself?”  Of course you can; content isn’t a virgin.  We get into this habit because we’ve split creation and selling into two arbitrary categories, and there are some people who don’t want non-virginal content (like a medieval prince, they want first rights).  Unless you’re trying to sell to those people as part of your indie publishing strategy, and unless you’ve given away rights stupidly to one of those people, the answer is yes, of course you can resell content.

Here’s yet another marketing brain idea that I struggled with recently (in fact, yesterday):  you don’t need to be an expert to turn ideas into content.  We’re so invested in the idea that you have to have a sales platform with a bunch of letters after your name that it’s hard for us to think in terms of knowing enough to write it, or write about it.

To people with the creative/marketing split, we think, “I can’t publish my own short stories.  How am I supposed to know if they’re good enough?”  We think, “Sure, people like when I talk about X (in person, on blogs, over social media), but why would I want to make money off that?  That’s just stuff that I give away for free.”

The thing that hit me a couple of days ago:  if I’m going to research something well enough to do it myself, I should be writing about it.  Duh, right?  So what am I researching?

Anyway.  A long time ago, Becky tried to explain this to me, that what I should be doing is forcing other sites to take my research and pay me for it.  I didn’t get it.  Now I’m starting to see it.

More projects than I can ever accomplish.  What should I do?

Hah!  I’m an indie.  Whatever I want…as long as I finish it and sell it.

*I was talking to Doyce Testerman a while back and he was talking about how it was easier for him to write novels than short stories, because short stories were something that he could conceive of as being perfect.  I had to laugh:  I’m the other way around.  I shed short stories.  Okay, yeah, maybe I’d be better served by analyzing them and fixing them, but to me a short story (up to about 5K, say) is a snakeskin, something that I peel off because I have an itch to write.  Or (to completely switch metaphors here) short stories are like being a sumo wrestler.  You can’t really analyze from the sumo wrestler’s point of view until after the match.  It’s one big shove, most of the time.  Novels?  That’s where I overthink.