Hit the Ground Running: Back from Oregon

So it’s been a busy couple of weeks.  I went to a workshop out in Oregon:  The Character Voice & Setting Workshop with Dean Wesley Smith and Kristine Katherine Rusch.

As always, I’m left with the impression that I love the ocean, but being next to it for too long would be bad for me.  A bunch of us went for walks by  the ocean, and I’d wander off in the middle of a conversation or something.  I managed not to bring home a bunch of those rocks with the holes in them, because they freak out security every time.  Plus, being near the ocean means the only way I can make it through the day is by drinking (Kip’s excellent) coffee in the morning.  I didn’t have any problems with withdrawal when I was back, which always strikes me as funny.

So take two people who have been studying, as writers, for years how to screw with readers brains both consciously and subconsciously, and have them apply immersive learning techniques (is that an official thing?) on twenty-odd suicidally dedicated writers for a week, and mix.

I am not the same person as I was when I left.  I mean, I don’t even read the same.  For example, I picked up A Cureable Romantic off the bookshelf in my cabin, sat down on the red velvet armchair with arms that went up past myarmpits, and read the beginning when I first got there:  I had to have it so bad I wrote down the title in my notebook, because I knew I’d forget about it by the time the week was over.  I didn’t read more than the first page, though, because I suddenly remembered that I shouldn’t read fiction while I was there.

You don’t want to indulge in any drug of choice while you’re there, or there are some days you’ll want to drug yourself into a stupor.  And books are my drug.

Anyway, towards Thursday, I picked the book up again to try out an analysis technique–and loathed it.  The crazy,  post-modern puffins with eyes like black Target symbols stared down at me from their paintings and said, “Good luck reading that.”  (It was a surreal kind of cabin.)  The author struck me as a one-trick pony–someone who knew how to write description.  Paragraphs and paragraphs of pointless description.

Today, I skimmed over the beginning again at Amazon.  Eh, it struck me as better than I thought that Thursday, but my eyes still slide off those paragraphs.  Great sensual detail.  Great way to handwave people into not realizing it’s just walking them along to the real beginning. Durrrr.

I went, I lost my new Kindle on the plane while talking to a math teacher who was teaching out in the sticks of Colorado after being brought up with money and having gone through several very prestigious careers and now knew that her calling was to teach but she was going to get her PhD in either cosmology or astrophysics anyway and explained dark matter to me as the opposite of gravity–so can you blame me for being distracted?–took the class, came back, and worked my ass off last week.  No blogging until I had the fires put out.  And no blogging during writing time.

So now: fires banked but not out.  And I wrote 8K today (if not on the novel, see below), so I get to blog.

I started a new novel, April Fool’s Day, as a way to kill time while traveling back.  It was supposed to be a short story and got out of hand, because I’m going to have trouble pacing for a while.  The temptation is to stick too much in at this point. And I determined that I’m going to start doing the weekly story challenge again, if for no other reason that I have new toys in my toybox to play with–but also because I need a break from this novel.  I don’t know what made me think I had to write a romance, but I did, and now a guy’s the main character, which (I know) you’re not supposed to do.  Fortunately I have a couple of guys who will read the thing for me and tell me whether it works.  I mean, the main character’s not even that macho!  But I’m trying to write it using different techniques–pantsing it, for one thing–so I guess it’s all right to be nervous and all herky-jerky.  It’s nonlinear, too, which I never do.

And now for some photos! 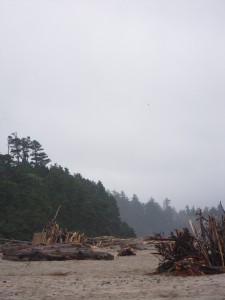 Oregon Coast.  Heavy winter storms the previous week had thrown all kinds of tree trunks up on shore. 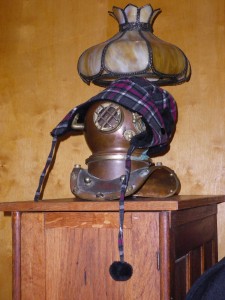 One of my cabin’s decorations, a miniature diver’s helmet, has a new hat. 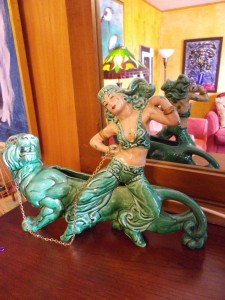 Deja Thoris statue?  Totally in my room.  Staying at the Anchor is like staying at The House on the Rock, only with MUCH better food. 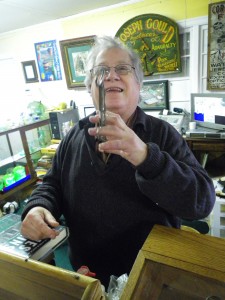 Bookstore owner Sheldon McAurthur demonstrates his Civil War-era tonsil snipper with glee.  Stop in at North by Northwest Books if you get a chance, and ask him what you should read.  He’ll mail for you.  I just got my box of books this afternoon.  Glee! 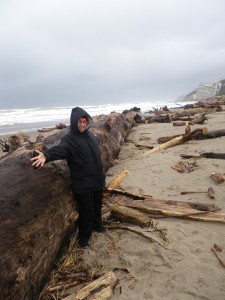 An update on the Kindle:  either someone has genuinely found it, or it’s a trap.  At any rate, I got an email supposedly from United’s Lost and Found department asking me to send them my credit card information.  I winced and asked them to set me up with some kind of link from the United site. Then I called customer service and spent about half an hour on the phone with a very helpful person with a very heavy Indian accent.  But we muddled through, the box should come COD, and I didn’t have to give out any personal information that United didn’t already have.  Or my credit card information.   We’ll see.

Can’t find your favorite authors at your library ebook site?