Now at Smashwords.com, Amazon.com, and Barnes and Noble for $2.99. 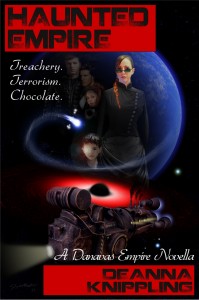 Aoife locked the door to the cottage that served as her office. The fairshopper library trees whispered around her, muttering in unintelligible codes. A leaf dropped in front of her face, hissing data. She ignored it and followed the laboriously winding stone path to the garden exit.

Aoife spotted a familiar horse-drawn cab with two brass-handled doors and a rail around the roof for luggage. The cab driver, Angus, pulled to a halt, tipped his threadbare top hat at her, and started to jump down.

Aoife jerked opened the cab door, vaulted in, and latched it behind her. She shouted up, “Don’t bother with the niceties, Angus. Just take me home.”

“What happened then? Did ye not get funding for yer project?”

Aoife opened the door on Angus’s side and stood on tiptoe to peek up at him. “Angus, ye wouldn’t believe it. They wanted me to turn over all my research without a breath of promise that I’d be the one to finish the project. They never intended to give me funding. I’m too valuable to lose from the library, they said.” She sat down, pulled a handkerchief out of her sleeve, and dabbed at her face. She would not start bawling in a cab like a broken-hearted trollop weeping over her lost lover.