Rain on someone else’s parade by getting your copy free this weekend using code PR29Rat Smashwords. 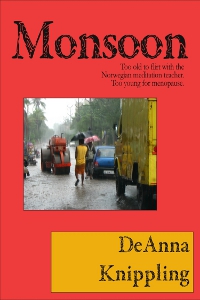