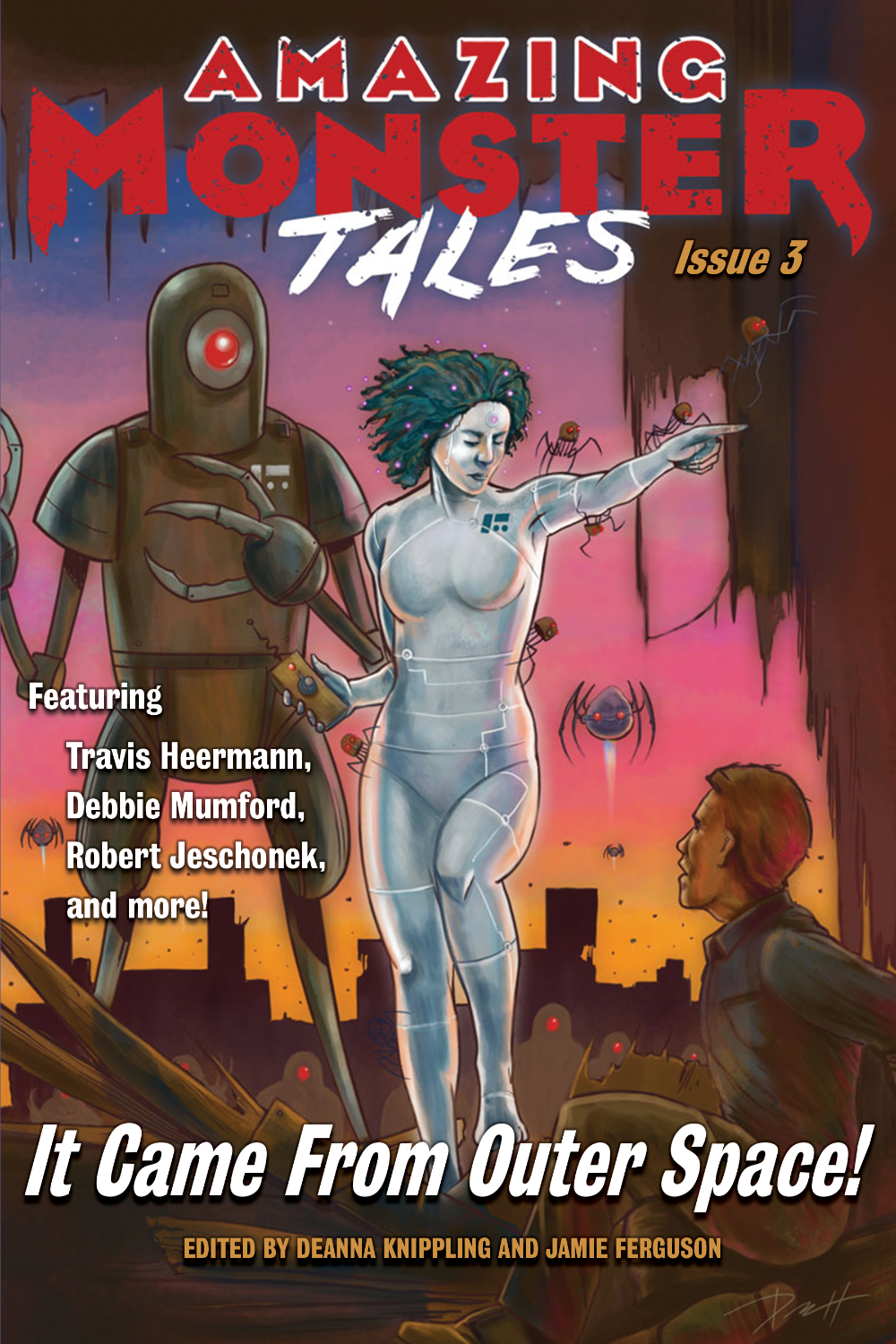 Hello my Earthling! Hello my starling!

Prepare to discover realms at the furthest edges of human imagination.

From the depths of outer space…

To the depths of the sea…

Jason Dias brings unusual aliens to the table in “Day of the Raptors,” with a tale of aliens who left Earth millions of years ago…only to return and find that the wrong species had taken over the planet! Evolution has led our planet down some mysterious and ancient pathways that could save or damn us all…

“The Mysterious Artifact,” by DeAnna Knippling, is an homage to the early female pulp writer Francis Stevens, a.k.a. Gertrude Barrows Bennett. In this tale, two siblings pick up a mysterious object that whisks them away to a mysterious world that seems all too familiar.

In another pulp-style tale, jetpack flyboy extraordinaire “Daring” Dorian Pace encounters a plot by Nazis to capture an alien and take over the world! “Cape Disillusionment,” by Charles Eugene Anderson and Jim LeMay, is the quintessence of an alien invasion tale, full of glorious adventure.

“The Queen’s Captive,” by Debbie Mumford goes into the depths of space to a place where humanity is unknown—or at least misunderstood, by an alien race that would rather take humanity for granted.

Rebecca Hodgkins’s story, “You Are Not Alone,” is a short tale of the unlikeliest of locations in which to find an alien…and the inevitable consequences of that discovery!

Alien tales often make for excellent calculations on where the line between humanity and other is—and whether that’s important, as in Thea Hutcheson’s “Adding Up the Cat Numbers.”

Calculations—and recalculations, due to an unexpected event—take place in Travis Heermann’s deep-space story “Void Song.” What humanity needs as we explore the universe isn’t fail-safe systems that cannot adapt to the unforeseeable…but is it possible to become too adaptable?

Shannon Lawrence’s “Incident at Ben E’s” is set at that most alien of human locations: a children’s birthday party. At a certain place with cheap pizza, lots of very loud games, and animatronic monstrosities that are worse than anything from outer space…or are they?

An engineering/military team is sent to an alien base as a “backup plan” for a vital diplomatic mission—one that may be intended to fail—in Ron Collins’s story, “Building a Bomb.” How far will they go to carry out their mission?

Robert Jeschonek’s tale, “The Greatest Serial Killer in the Universe,” is the kind of story that makes you wonder what the main character, Luther James Paraclete, will get up to next…because you can’t keep someone with that much talent down for long.

“War and Marketing,” by Stefon Mears, is set on Earth, where an alien invasion has everyone stumped: just what do the aliens want? It’s up to a man with a talent for finding things to come up with a solution.

Sometimes even the aliens don’t know what they want, as in Jamie Ferguson’s “Time to Play,” a tale of a visit from outer space that has unintended but dire consequences to Earth, and the way that humanity begins to slowly corrupt those who cannot die…but there’s still hope…

Meyari McFarland’s “Old Friends from Out of Town” is a tale of the friends of a human who come to visit during a family reunion—friends that she met when she was the first surviving explorer of a new planet. What new adventures will she encounter among her friends, after all this time has passed?

Paul Roman Martinez designed the cover and the Amazing Monster Tales masthead. He also writes and illustrates for The Adventures of the 19XX, including graphic novels, the board game, and more! You can find Paul at his website, or on Facebook.

Find It Came From Outer Space!

Amazing Monster Tales is a series of monster anthologies full of fast-paced action-adventure stories. Whether you love monsters or fear them, they are the coolest! This series features a mix of classic monsters and monsters that you’ve never seen before!

Habit: The Chaos-Winged Butterfly of Change