A Visit to Monet

In December of last year, I went to the Denver Art Museum exhibit of Oscar-Claude Monet, an Impressionist painter who died in 1926.

I’ve been trying to attend the bigger exhibitions at the Denver Art Museum over the last few years. I’ve seen Van Gogh, Dior, Rembrandt, Degas, more. It is, first and foremost, an overwhelming experience: first you have to get there. I find driving in city center to be intimidating at the best of times. I normally take the light rail from the Mineral Station to Union Station, and then take the 16th Street pedestrian bus to the Civic Center Station, and walk to the art museum from there.

But it was cold, and damp, and I had bronchitis. I was too stubborn to stay home, but I was not too stubborn to drive. After a few near-misses and wrong turns, I parked, walked over to the Leven Deli Company, had lunch, and walked over to the art museum. I showed my ticket (with these big exhibitions, you have to reserve a time slot ahead of time, or risk missing your chance to see the exhibit) and wandered around for a few minutes until it was time to begin.

I entered the exhibit with about fifty dear strangers, all of whom wanted to see the same thing at the same time, while holding an audio track player up to their ears. What we so intently studied was art by a Monet who competent but not yet identifiable as himself. We saw art by Eugene Boudin, Monet’s mentor, who was also part of the Impressionistic movement and was one of the first French painters to pain en plein air, or outside, in the weather, under the light.

On the one hand, Boudin’s paintings are enjoyable: fresh, vivid, full of technique that allowed the artist to pain very quickly, yet still feel realistic. His work was full of color, and mood, and light.

But soon the path of the exhibit led us away from Boudin.

We studied Monet’s landscape paintings. At first, they contained human figures. One of my favorite paintings of the exhibit was The Beach at Trouville (1870), which showed the boardwalk, houses and churches to the right, tinted golden by southern noon sunlight, and beach-goers in full dress: suits, parasols, dresses with tiers of ruffles. The clouds, the sea are natural colors, the sand is everywhere, boards are warped—and the flags in the background, amusingly, have been caught by the wind at different strengths, so that the ones in the rear of the picture sag, while the ones nearest the painter flutter.

Finally, he began to focus in upon his garden in Giverny. He planted roses, he designed paths and views, he dug ponds. His most famous paintings, of water lilies, were designed by him personally, from the roots up.

Monet’s art had always been the art of the close-up versus the far-away. To see the paintings in real life is to see how generously open he was about his technique. It seemed as though he had no embarrassment about the impressions he made turning into uninterpretable lines, smears, and dabs upon closer inspection. Some artists seem to fear being “found out,” with their technique being so exact that one is never quite sure whether one is looking at a photograph or a reflection. The Impressionists, of course, flaunted realism as a convention, but Monet seems to have cared even less than usual about exposing the artificiality of his work.

In fact, one of the things that most impressed me was that no two paintings used the same techniques. Dawn might require not just a particular set of colors, but a particular pattern of dry, soft daubs. A stormy noon of intermittent light might require heavy jabs at the canvas, paint laid thick and sharp.  Two paintings of the same scene might almost make you think they had been done by two friends sitting side by side, but certainly not the same painter. It’s only from a distance that the style seems remotely consistent.

And then we come to the room with the lilies.

There’s a short film showing Monet at one of his lily canvases. It’s an enormous canvas, and he’s standing very close to it, turning back and forth between canvas and pond. I’m not sure which particular lily painting he was creating—I forgot to write it down—but it seems almost like a work of magic. He never steps back from the canvas to see what it is that he has painted at a distance. It’s almost as if he isn’t worried about its overall appearance anymore.

By the time I looked at the lily canvases, I was tired and my feet hurt. I was tired of listening to narrators giving me this or that invaluable information about the canvases. I disliked being surrounded by constant throngs of not-terribly-polite people. I was thirsty. My back hurt. I needed to pee.

I had been in the exhibit for three hours by that point.

What caught me then about the lilies wasn’t their colors, or their shapes, or the techniques that had been used. It was the sense that none of it was quite real, and was not—and had never been—an impression of anything that had actually existed.

The colors and shapes had become concepts. Existence was reflection; solidity was transience; boundaries were fuzzy and didn’t quite line up with the edges of things. Some of the edges of the paintings had been left exposed, revealing the canvas, and sometimes had been painted so the canvas showed through in edges throughout.

The colors were beautiful, yes, but they were not real.

I had pushed myself to the point where I felt like I was looking at an artist’s subconscious experience of the idea of reality itself, as though he had painted so attentively, and for so long, that he had begun to glimpse the Matrix, as it were, underlying what he saw, and knew no other way to communicate that.

Also, he was developing cataracts.

I wandered through the souvenir shop, almost bought a small magnet of The Beach at Trouville, didn’t, got a cup of coffee, sat, drank it, felt better.

Most of the attendees had gone by then. The rooms weren’t empty, but I had outlasted most of the visitors. I went through the other exhibitions—Treasures of British Art, Shantell Martin, and The Light Show—which I particularly liked. Pieces showed or used different types of light: shadow puppets, interior design, reflective surfaces, mythological embodiments of light (and darkness), and mirrors, including a mirrored tunnel that was supposed to depict the journey to the afterlife, if I recall correctly. I had to wear shoe covers, which made the glass underfoot feel liquid as I walked.

It was cold, icy, and wet when I left. I took a picture, my brain still overwhelmed by subtleties of light and color. 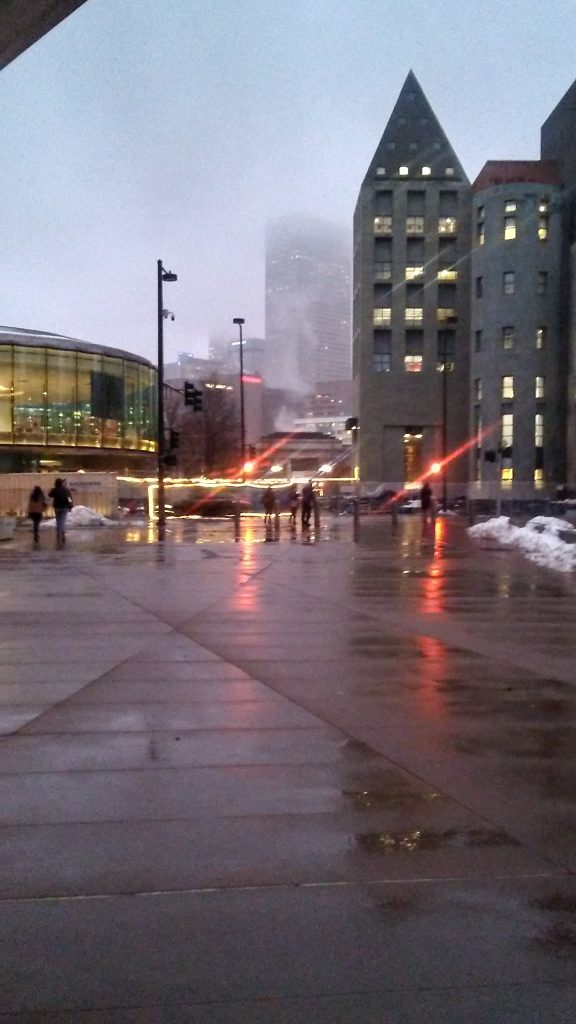 Writing Craft: Lessons In Fiction for the Working Writer