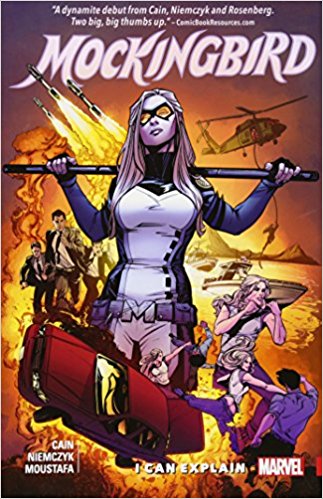 The Mockingbird graphic novels, #1 and #2, written by Chelsea Cain and illustrated by Kate Niemczyk, are a short series of superhero comics in the Marvel universe (the same as the movies, but with a character that hasn’t appeared in any of the movies yet).  Anyone who has seen the first Avengers movie with probably have enough knowledge of how the Marvel universe works well enough to follow along.

Writer Chelsea Cain is best known for her serial killer/suspense novels in the Archie Sheridan/Gretchen Lowell series, beginning with Heartsick.

Most of graphic novels in the main Marvel and DC universes are played in all seriousness, not for laughs.  There are some exceptions; one of the more recent characters who consistently gets played for laughs is Deadpool, but comic characters tend to be overwhelmed by the Batmans, Supermans, Professor Xs, Magnetos, and so on.

The comic characters also tend to be idiots; it’s pretty easy to squeeze a laugh out of Deadpool that way.

As portrayed in these two graphic novels, Mocking bird is a comic, yet still brilliant, character.  She faces off, in the first collection, against a hospital bureaucracy that’s almost more puissant than the actual villains she faces as a superhero.  In the second collection, she’s up against powerful forces again, but between her and victory stand two conventions and a cruise ship, including lots of adorable corgis.

My recommendations here are for people who want some light, humerous reading in a graphic novel format.  I would caution that this is a series that fits in the greater Marvel universe, so you’re just going to have to let some of the references fly by.  I don’t recommend this series for most teens, not because of the subject matter or language (which is more hinted at than shown), but because of the faster, quippier level of humor.  However, if a reader can keep up with Deadpool graphic novels (which can be quite witty and satirical), I’d give it a try.

The character is a bit Mary-Sue-ish:  good things happen for her and she is extremely irreverent toward the men in her life, but nothing happens without complications, reactions, or challenges.

I would some readers that the humor here treats very lightly of some very serious issues, including a rape that happens before the events of the story.

2 thoughts on “Think Like A Librarian: Mockingbird Graphic Novels, by Chelsea Cain”