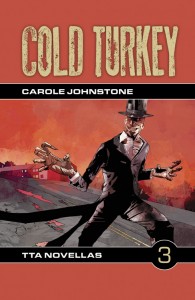 I received a review copy of this ebook in exchange for a review.  Available via TTA Press, with additional links as I get ’em.

Okay.  So there’s a short story in Stephen King’s Night Shift called “Quitters, Inc.”  I like it.  It’s about a guy who quits smoking. I thought “Quitters, Inc.” was all there really was to say with regards to quitting smoking, that is, the entirety of what needed to be said in the horror genre, possibly even the sum total of everything that needed to be said, fictionally, about quitting smoking in any genre.

The writing in Cold Turkey is excellent.  You are not here; you are uncomfortably there, with Raym, teaching his dead-end teaching job at the same dead-end school that he went to when he was a kid, under the same Head.  You’re stuck in the same teacher’s lounge.  You’re with the same girl that he’s been with since University.  And they hate each other:  but why bother giving each other up?  They’re used to each other, after all, which is the sum of Raym’s life.  Until now.

Because Raym wants to give up smoking.  Cold turkey, as the title says.

Along comes the tally man, who counts up the number of cigarettes you’ve had, and…

I can’t say that reading Cold Turkey would ever help anyone quit smoking.  Maybe it’s just for those of us who have to put up with smokers, quitting or smoking. I admire people who have quit smoking…but they are indeed self-justified pricks as smokers, and then whiny pissant assholes while they’re quitting, and this book captures both of those states very well.

The Madness that is Plotto