Or you could pick up a free copy by signing up for my newsletter via Instafreebie.  (If you sign up the regular way, you just get a copy of Alice’s Adventures in Underland.)  The freebie is to drive reviews of the book on Amazon (and Goodreads, once the page is generated) and will only last to the end of February. 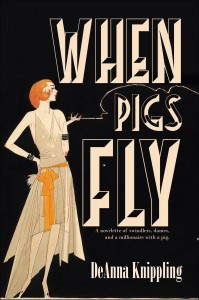 A novelette of swindlers, dames, and a millionaire with a pig.Cedar Rapids, Iowa, 1925. Right before New Year’s Day.Genevra Valentine is a roper, someone who brings in marks for a team of con artists working in the basement of a soda fountain-come-speakeasy. The mark she just brought in has a story she can’t believe: he’s a millionaire cattleman from Chicago who wants to race his famous racing pig, Zeus, against the fastest runner anyone can produce.It sounds like a con. And she should know.But the chance to fleece a millionaire isn’t something that Genevra or her boss can pass up.

So in Cedar Rapids Iowa at the end of 1925, which if I may remind you was in the middle of the Prohibition, there were two competing wire stores. A wire store is a place where you can set up a con job involving a so-called telegraph operator, a guy who thinks he’s betting on horses without the inconvenience of losing money at it, and someone to bring those two people together—a roper. Also there are a number of side characters, the kind that flesh out the crowd so a guy doesn’t feel so lonely while he’s getting fleeced.

The general idea is that your “telegraph operator” gets the race results from Western Union, calls them over to the guy who doesn’t like to lose money—the mark, that is—so he can put a bet in, and then, like two minutes later, sends the results to everybody else. The mark, no dummy, can put a last-second bet on the race winner before everyone else finds out about it.

So it doesn’t look like he’s getting something for nothing, the mark has to agree to give the telegraph operator a cut of the winnings.

This works out great for the mark the first time around. First you gotta give him a taste of winning if you want him to come back for more. After that it’s up to the team of cons to take as much money off the guy as possible, sometimes more than once. A real good wire store can leave it so the mark thinks that it was all just stinking bad luck that the deal didn’t go through. Leaving him literally begging for another chance to get ripped off again.

A couple of rules of thumb here.

First, don’t have two wire stores in one town.

One of the things you gotta do with any kind of store, be it a wire or payoff store, or even one of the old fight and foot-race stores, is put the fix in—that is, to pay off the cops. If you got two stores in the same town (aside from big places like New York or Chicago), that means that the price of the fix goes up. And not just a little bit, either—you never know when the other guys are going to screw you over and hire the cops to bust you. So you’re constantly outbidding each other, which means you gotta take bigger risks during the cons. People get real emotional. People who get real emotional take stupid risks. Everything spirals outta control. It’s no good.

Second, don’t take a mark from his own hometown.

That one should be self-explanatory. When you’re outta town and somewhere new, it kinda feels like you’re in a foreign country. If you see something strange, you chalk it up to local customs. Which makes it easier for the cons to cover if somebody makes a mistake.

And nobody wants a sucker hanging around after the game is over. Some people fool so hard you couldn’t scrape ’em off with a stick…

Kobo 30% off Sale including Alice’s Adventures in Underland