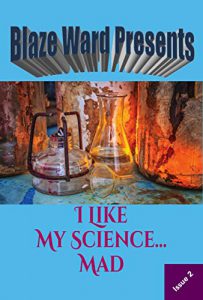 Come with us on a twisted journey of science gone wrong and gods rising to threaten us all. Of private detectives on the moon and dieselpunk ladies saving the day. Academics making dark pacts and taking vengeance into their own hands. Mad.

Includes my story, “The Legends of Castle Frankenstein.”

What is the true story of Castle Frankenstein, the inspiration for Mary Shelley’s famous novel? Was there ever a mad scientist? A monster? A pursuit across the Arctic ice? Because there is a Castle Frankenstein, and you can go there and walk around the ruined stones, poke around in the forest, and eat lunch.

The legends that get told by the people who work at Castle Frankenstein are strange, but the layers leading downward into the truth are stranger.

An alchemist with no soul. A mysterious object falling from the sky. Terrified peasants with pitchforks and torches. An eerie whistling that echoes through the forest. A fallen tower. The elixir of life.

And just how much of it are the locals covering up?

Let me tell you a story about Castle Frankenstein.

Not the novel written by Mary Shelley but the castle, which actually exists.  Once, years ago, I went to Europe on a Wanderjahr, a year where I toured all over Europe, sketching architecture and seeing parts of the world that weren’t Iowa.  I fell in love that year, had my heart broken, and saw some things that blew my mind.

And, while I was there, visited the actual Frankenstein Castle.

Let me just say, straight off, that the legends you hear about the place are fake.

In case you haven’t heard the fake legend, let me get you caught up on it so I can tell you the real one.  Frankenstein’s Castle is nothing but ruins now, but it was built in the thirteenth century in order to keep an eye on the bandits in the area.  The Baron “von und zu Frankenstein,” was actually a guy named Conrad Reiz; the family eventually died out in the early sixteen hundreds.  The castle was sold to another noble family, the Landgraves of Hesse-Darmstadt, who, having better things to do than take care of the place, started to let it fall into ruin.

The landgraves aren’t the mad scientists in this scenario.

But there was one.

Johann Conrad Dippel was born at the castle in 1673 and was later hired on as a professional alchemist.  Back then there really were such things as professional alchemists.  He created a formula that was supposed to be the Elixir of Life: a nasty, sludgy black liquid that was supposed to extend the life of the user to one hundred and thirty-five years.

In the fake legend, Dippel blew up one of the castle towers while making the elixir of life, then offered to trade the (now ruined) castle in exchange for the recipe.  The landgraves refused. Dippel went elsewhere with his discovery, eventually using his elixir of life to help create a synthetic version of Prussian blue pigment—which was a huge deal at the time, considering that you used to have to make blue pigments by grinding up lapis lazuli stones, literal jewels.  So trading a castle for the recipe to a cheaply manufactured pigment might not have been a bad idea at the time.

However, Dippel was no misunderstood hero.  He was a complete asshole.  He would dig up corpses and perform anatomical experiments on them.  Aha, you’re saying.  Just like in the novel.  Right, but it gets weirder.  One of the things he tried to do was switch souls between bodies using funnels.

Not living bodies, mind you.  Just dead ones.

Dippel was so off-putting that the benchmark of religious oddity at the time, Emanuel Swedenborg, called him “a most vile devil…who attempted wicked things.”  This from a guy who believed that he could freely travel between heaven and hell and speak to angels, demons, and the dead.  He also claimed that Dippel tried to sway people away from Christianity and “take away all their intelligence of truth and good, and leaving them in a kind of delirium.”

Finally, Dippel decided it was time to put his money where his mouth was and drink his elixir of life, after which he promptly died.

Afterwards, this elixir, known as Dippel’s Oil or bone oil, was used as an insect and animal repellant and was even used in World War II as a chemical warfare agent.  Dump some oil in a desert well, and the water would be undrinkably foul, but not actually fatal (Dippel’s death to the contrary).  Which meant that using it wasn’t a violation of the Geneva conventions.

How much of the above is true, I can’t say, other than that Dippel didn’t blow up a tower, because there weren’t any.  They were added during the nineteenth century, long after his death.

There are other cool legends about the castle that have nothing to do with the “Frankenstein” story.  For example, there’s a fountain of youth that only married women could use, and then only one day a year and only if they performed a feat of bravery.  The original St. George versus the dragon story possibly happened in the area.  And Siegfried of the Nibelungenlied might have been murdered nearby, of which the fat ladies of Wagner’s operas doth sing.  A section of the forest, the Odenwald, has magnetic rocks that screw with compasses.  The area is so famously weird that the Ghost Hunter International crew even filmed an early episode at the castle.  Every castle has its ghost, often headless, and sometimes they’re nuns.  The devil has a dozen landmarks named after him.  Witches are everywhere.  Some of them are like, “Black cats?  Pffft.  Hold my beer and watch me turn into a pig.”

Mary Shelley was known to have come within ten miles of the castle two years before she wrote her book, but never saw the castle itself.  But the coincidences between the legend and her novel seem too much to ignore completely.

As in, the book’s called Frankenstein.

But, as I said, that’s not the real legend, just the fake one.