All, I’m giving away three signed copies of Tales Told Under the Covers: Zombie Girl Invasion & Other Stories. Three paper copies, via Goodreads–sign up from now to December 31st.  I may toss in an ebook copy of Exotics 1, if it’s ready.

If you would like to buy a signed copy for delivery before Christmas, contact me at dknippling {at} gmail {dot} com. 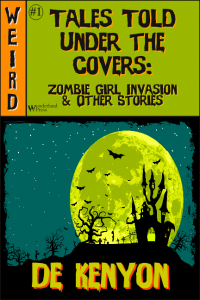 “…whilst reading “Tales Told Under The Covers” I definitely felt that De is the natural successor to Lewis Carroll in terms of imagination, variety, surreal madness and dark wit.” –Emma Hunneyball

“These kids were underdogs — like I was as a kid. They inspired bravery and made me laugh out loud. The stories themselves are a blast, even at their creepiest; De has the coolest imagination.” –Liz Barone

TALES TOLD UNDER THE COVERS: ZOMBIE GIRL INVASION & OTHER STORIES, by De Kenyon (that is, me!)

And other online stores.

Look back at anger