Strong language and adult situations, for those of you who find such thing appealing.  I was thinking…I particularly like those stylized black and white covers.  Here’s a version that fits my short story template. 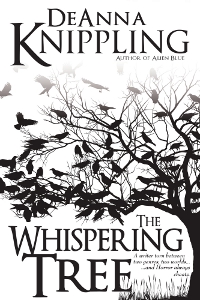 “The Whispering Tree” will be free here for one week only, but you can also buy a copy at B&N, Amazon, Smashwords, Apple, Kobo, Powell’s and more.

The love of my life had just told me that the reason she’d been holding herself back was that she wasn’t human, but a Fairy. A real one. And that, if I had went to Fairy with her, according to the rules of fantasy, we would be setting inevitable machines of tragedy in motion that would work to keep us apart forever after.

I’d just told her that I intended to find a way around the rules. It was what I did, after all. Not break rules so much as just…weasel around them.

“When you have the rules figured out, it’s time to change the rules,” I said, more bravely than I felt.

She put her hands on the small, round table…and headbutted me. Oh, I don’t think it was intentional; in her next movement, she grabbed both sides of my head and kissed me. “Then run away with me,” she said. “To Fairy. And we will change everything.”

I saw stars and the inside of my skull felt as though it had a nosebleed. “Didn’t you just tell me that if I loved you we’d have to live here forever—”

This story is no longer available for free.  Please see the links above or your favorite ebook seller to purchase a copy.