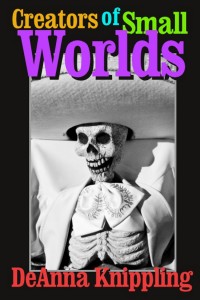 Horror/Cthulu.  Yes, this is my “I met a worshipper of Cthulu on Facebook” story.

Andrea had one chance to talk to Chris Demoulin before he unleashed horror on Las Vegas—and failed.  Now the question isn’t, “could she have stopped him?” but, “can she keep stop herself from becoming just like him?”

He found me on Facebook. Usually, the way you find people is via a friend of a friend, but he wasn’t friends with anyone I was friends with, so I’m not sure how he found me. He didn’t have actual friends on his friends list, just political figures and celebrities. Did he look me up on purpose? At first I was shocked that he was on Facebook at all. Then I read his wall and realized that to him, it was just another soapbox with no one listening.

I had both hoped and feared that I would run into him. We all have our heroes, no matter how naively we choose them.

When I first met him, in high school, he was an infamous bad boy. He was the leader of a gang of smart boys, boys that were sarcastic and witty and lived outside the box. They wore different clothes; they listened to different bands. They doodled brightly-colored skulls on their arms because they were too young to get tattoos.

He got a girl pregnant.

I stayed a virgin.

If I’d been a boy, I would have been in his gang of smart boys. But I was a girl, so there you go: subhuman. I could barely talk. I was friends with people who were kind but not terribly—sorry—interesting. Solid people, people at the bottom of the pecking order, but good people.

But oh, how I wanted to get into that gang of smart boys.

Years went by, and I switched from writing poetry to creating small worlds. At first they were only in my head on a little shelf, like collectable ornaments. But then I put to paper some really bad short stories and a novel that was even worse. I kept at it: I created characters and killed them off; I damned them; I redeemed them. I got better.

And then I got his friend request.

Review of Tales Told Under the Covers