Now on Sale at Smashwords, B&N, Amazon, and OmniLit. 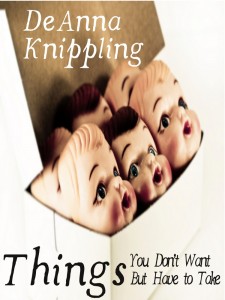 She hid from the thing for years, but it found her and came to her in a box with no real return address and her own handwriting on the label.  She knew what would happen if she tried to fight the cold thing with its claws in her neck.  Her only hope was to hide it from her husband…

When it’s time, you know.

I opened my front door.  The deliveryman, a guy of about twenty with sun-streaked hair and the musculature of a young god, had his fist up in the air; either he was going to hit me, or he was just about to knock.

“Hey, Joe,” I said.  I plucked the signature pad out of his other hand before he could say boo and signed for the package.  “Do you want some chocolate chip cookies?” I asked.  “I made them last night.”  In fact, I’d had such a bad nightmare last night (about the box) that I hadn’t been able to go back to sleep.  I know, cookies, right?  But cookies are wholesome.  And they smell good.  I’d eaten about a dozen already.

Joe gaped at me and retrieved the signature pad.  “How do you know my name?”

I pointed at his nametag and walked into the kitchen.  The cookies were still a little bit warm.  “Want some milk?” I yelled into the hallway.

I put the cookies on a paper plate and wrapped it with plastic wrap.  “You sure?”

No answer.  I brought them back out.  Joe had picked up the package and was staring at it.  He looked like he was about to vomit.  Probably from the smell emanating from the box.

You know, Joe reminded me of an old boyfriend I had, who was always trying to keep me out of trouble.  Hadn’t worked.  Joe looked up at me, and I knew he was going to try to run off with that box.

I hate it when people try to be noble.

I hate it when people call me ma’am.  But I’m married to a company man and stay home all day.  I wear color-coordinated pants and sandals and get matching manicures.  So I guess I can’t complain.  It’s what I’ve made myself look like, after all.  Protective coloration.

Something heavy in the box shifted across the bottom, rattling the packing peanuts.

I wrote this story a while ago; it seems to be the one that consistently almost gets picked, but bounces, but I’m actually quite proud of it.

The story’s about a thing in a box that comes to a woman who’s been living the life of a perfect suburban housewife. However, she has secrets…

The thing is, I never really clarify what those secrets are, or what’s going on. I like to ask people what they think the thing in the box is.  Click for more if you want to see what other people have said, and what my theories are.  I really recommend that you read the story first, though.  Feel free to add your thoughts to the comments.  There’s no right answer.

And I seem to remember that there were some other ones, but now I can’t remember.

What I picked was that the woman had had some kind of disease and had made a deal with the demon that the disease would never come back as long as she loved the demon forever.  However, after I finished the story and had a couple of people read it, I realized that it could mean anything.  I love to hear what other people come up with.  Currently, trying to get rid of several negatives out of my head (like lack of self-confidence; I’m in the fake-it-till-you-make-it stage there), it seems like the thing is just something all in her head, and she if she could figure out how to get the relevant idea out of her head, the thing would be gone.  I think the husband thinks this, too, but I had no idea, originally.

Anyway, I wrote this all during a long-gone class to walk us through the updates for a bunch of computer systems while I worked data entry for a bank.  Boring class = surreal, fill-in-the-blank story about the constant, often horrifying process of recovery.