You can’t tie down an Amazon…there’s no coupon on this one; it’s my first permanently FREE story.  (Note:  It may take some sites longer than others to go free.)

This was first published as in audio at Nil Desperandum. 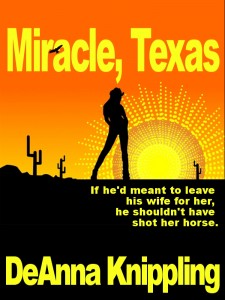 The man rode into Amazon Valley the same way they all did, blindfolded, hooded, and with his hands tied behind his back. Men were trouble, and Justine liked them that way. A Weird West tale.

If he’d meant to leave his wife for her, he shouldn’t have shot her horse.

Justine waved to the banditos and hefted her saddlebags. She’d sold the banditos her saddle and tack in payment for the ride from El Paso to Miracle, Texas. They’d heard of Marguerite’s Amazons and therefore weren’t prepared to risk doing her bodily harm, but they weren’t going to give her a ride for free. She walked the last mile and a half, one foot in front of the other. Her boots hurt her feet; she wasn’t used to walking.

Miracle was a shitty little border town made out of unpainted gray pine boards shrinking in the dry, hot air until light and dust sparkled through the cracks. Justine wasn’t sure whether she liked the place or not. She couldn’t live there, that was sure.

Justine dropped her saddlebags in front of the first tavern she passed. The sign read “The hatte  d G ass” and showed a busted shot glass tipped on its side. She waited.

The owner came out, a fat man with big arms. He could have broken her in half, if he could have caught her. She wiggled her feet inside her boots, getting her balance.

“What do you want?” he asked. Didn’t pay to be too rude, out in the desert. Even to somebody like Justine.

He nodded toward her saddlebags. “Died in the desert.”

“Shot out from under me.”

The owner’s eyebrows went up. “I thought I heard the Amazons got burnt out.” He looked to the right. Justine followed his sightline and spotted the jail across the street and behind her. “You’re not here to make trouble, are you?”

“Depends on whether I get my horse.”

Justine opened her hand. She already had a gold coin in her palm. The coin had a woman’s head on one side and was blank on the other. The man inhaled quickly.

“Go on, take it,” Justine said. “It’s not like it means anything anymore. It’s just a piece of shiny metal now. Or don’t you want it?”

She tossed it at the man. He caught it, didn’t bother to check it.

She washed her face and untied her hair so the silver coins jingled free. Then she cleaned her guns, oiled them, and brushed the dirt and dust out of her holsters.

She ordered a whiskey at the bar, drank it, crossed herself, and walked across the street to the jailhouse.

She stopped outside the door and howled: “Giles Carsten! Get your mangy, murdering, cheatin’ ass out here, you lying son of a bitch!” She was prepared to continue on in such a fashion for quite some time, but Giles came out right away.

Her heart leapt in her chest like a hiccup. Giles wasn’t pretty. He had a big mouth and a beaky nose, and his jaw stuck out like the front of a train. He put his hands on the railing so Justine could see his wedding band shine dull orange in the sunset.

He said, “What seems to be the problem, miss?”

“You owe me a horse,” Justine said.

“I’ve never seen you before in my life.”

Justine spat on the ground. “You’re lucky all I want from you is a horse.”

“You’re a whore,” Giles said. “I don’t have anything to do with whores.”

It was like they were playing a game or acting out a play. Certain moves had to be made.

Justine pulled out a gun, just one. “You’ll give me a horse—and tack—or you’ll shoot me down in the street.” She held the butt of the gun on her shoulder, pointed up in the air.

“How about I put you in jail instead?”

“Give me a horse!” Justine screamed. It echoed back at her. Justine shook her head; her coins clinked together. “I’m going to eat and go to bed. And at dawn I’m going to find your horse and take it and ride out of this shithole.” Justine put her gun back in her holster and walked back to the hotel, where the owner was standing in the doorway.

“You getting out of my way?” she said. He stepped aside almost as though he hadn’t heard her.

Creating a Writer’s “Identity” without Being a Fake