Free Fiction Monday: In the Groves of Lord Satsuma 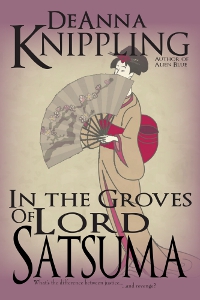 But now that they know that Heaven did not send the invaders, but that they simple come from the realms far from Earth, the people rush forth to attack the destroyers, instead of fleeing their strange, cutting ribbons.

A small victory brings the people joy, and they celebrate.  But the insolent peasant knows no limits to his “celebration.”

What will the Lady choose?  Justice, or revenge?

“In the Groves of Lord Satsuma” will be free here for one week only, but you can also buy a copy at B&N, Amazon, Smashwords, Apple, Kobo, Powell’s and more.

In the Groves of Lord Satsuma

I watched from the gates of the manor, impeccably dressed in my finest robes, to honor those who fought.

The leader of the survivors, the despicable Hashimoto Kenta, who had forced his preference ahead of that of my sons, rode through the mikan groves, down the slope, across the bridge, and into the daikon fields, where a month ago he was whipped for being lazy and stirring up other workers to argue and fight. He screamed a garbled battle cry as he rode one of my lord’s horses and waived one of my lord’s swords. I prayed for his death.

As I hoped, the three celestial invaders rose up out of the fields with their long, insect legs dripping rich brown earth and dangling with rotted leaves. The daikon had been harvested just before the invaders came, which was a fortunate thing. The first invader stabbed at Hashimoto with a sharp forelimb, and red blood sprayed, although I could not identify whether the injury was his or the horse’s. I smiled.

But Hashimoto, that thief of thieves, wheeled my lord’s horse even as the men charged into the field behind him. He had told them many things, that they were strong, that they would be safe from the invaders because the gods were with them. That kind of nonsense.

Two of the invaders charged the men. One invader still tried to kill Hashimoto, tearing bloody gashes into the back of my lord’s horse, which reared. The horse leapt forward, knocking men aside, streaming blood, charging across the creek to safety with Hashimoto still on its back. The horse disappeared into the lowest of the trees, heavy and bright with fruit that we had not dared to pick, they were so close to the fields where the invaders lurked. I could not see if he lived or died. I hoped for death.

The three invaders lifted their torsos off the ground and began their dance. They lifted their metal ribbons from the ground and spun with them, raising their forelimbs in the air, spinning, and striking out with the ribbons. Where the ribbons touched, blood flowed and limbs sailed through the air, even heads. The white of bone glimmered through the mud, and men screamed.

Still, more of them swarmed out of the groves, raising swords, rakes, shovels, or fists. Peasants’ weapons. There were only three of the invaders. Yesterday, a traveling monk had convinced us that they had not been sent from heaven before he had died, ribbon-slashed through the gut, and today the men were able to fight with clear wills. There was hope in their shoulders as they attacked, even though their leader had abandoned them.

The men swarmed the nearest of the invaders, at least a dozen losing their lives within the first few blows, struck down like harvested rice under the ribbon. The survivors—including my eldest son—grabbed the invader’s legs and clung like children to their mothers. The invader lifted its feet and shook them, but the men tied themselves to its legs with leather thongs. Other men threw hooks over the invader’s long, sticklike belly, drawing hemp ropes over it and heaving downward.

The other two invaders abandoned their attackers and ran to help the third, dropping their ribbons, lest they kill their companion. They tried to use their legs to scrape the men off, but the captured attacker fell and was staked into the mud with ropes. Its limbs were cut off with axes, then its head.

The invaders pounced on the head, snatching it up. As soon as one of them had it, its long whiskers dragging on the ground, they ran off with it, leaving the men behind.

My sons both lived, but many other men died.

{snip! this free fiction is over for the week–if you’d like a copy, please purchase it at your favorite online bookstore}

On Building a Writer’s Mission* Statement

New Fiction: In the Groves of Lord Satsuma