Try to catch the Smashwords free coupon code out of the corner of your eye….there it is:  VD39W. This weekend only. 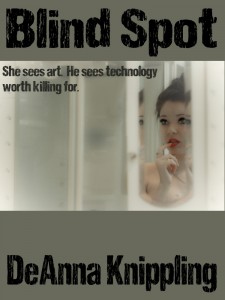 She sees art.  He sees technology worth killing for.

An artist who sees what nobody else sees:  the visual code generated by the eye’s own blind spot.  A VR developer who sees the possiblities–including the threat to her life.

“I can’t see myself,” Thomas said, raising his hand to touch the Mirror. The reflected room behind him was pale gray and filled with a line of guests, each craning their necks to see around him. It was a terrible sight, and he smiled in delight even as his eyes filled with tears. His body grieved for the lack of himself, the knowledge of how little he mattered, even as he felt like crowing with joy.

“Sir.” The guard shook his head. “Don’t touch.” He’d been saying it through the whole opening, no doubt, to incredulous guests trying to touch the work of art or science or whatever it was. Keeping people far back enough from the frame so they didn’t spill wine on it when it clicked.

The real trick was in the way the cameras removed the viewer’s image from the screen. The cameras didn’t just edit out the image of the viewer—which would have removed all people from the image—but placed a subtle pattern layer over all moving objects. The pattern was cued to align with the orientation of the eyes of each object, if it had any, and simulated the sensory data the eyes sent to the brain from the area directly over the optic nerve, or blind spot.