New fiction!  This is another book that’s going up on Kindle Direct Select, which means I’m leaving it up there exclusively for three months (until July 9).  I’ll announce when it’s available on other sites, but for now it’s at Amazon.com.

If you buy an Amazon copy but need an additional file format, contact me at publisher [at] wonderlandpress [dot] com.

Inspired by a discussion with one of Ray’s school crossing guards about the madness that was Easter on her grandparents’ farm–including finding last year’s Easter eggs.  And from Britney’s mention that they put out 500 eggs for their day-care Easter party.  500!  Which only worked out to five eggs per kid.  The joke at the beginning…well, that’s from Lee, which should surprise nobody who knows him. 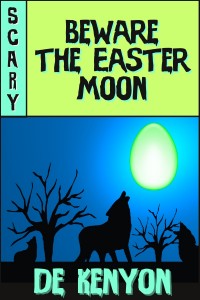 Colin’s tired of Grandpa stealing kids’ chocolate Easter eggs.  So he hatches a plan to make his Granpa eat one of last year’s Easter eggs.  One of the regular kind.  That stinks when it gets rotten.

It was a terrible plan.  But it was also a great plan.

It was shimmery white in the moonlight, but he knew it was really light green.

His hands were so cold they felt hot, but his fingers slid around the ice-hard egg and grabbed it like they would never let go.

On top of the hill was a shadow of something black.

Colin bit the front of his coat and backed up from the chicken coop. Inside he could hear the chickens clucking to themselves in their sleep.

Please eat the chickens instead.

Step by step he backed away from the chicken coop, Grandpa’s boots almost sliding off with ever step, until he reached the path back to the house.

Then he turned around and ran back to the gate as fast as he could. He jerked it open and it slammed behind him with a double bang.

Then he turned around and looked on the hill in the cow pasture. Nothing. Maybe nothing.

Two dark shadows moved, next to the chicken coop, then ran across the path to one of the sheds where Grandpa kept the tractors.

Colin checked the egg. Still had it.

He ran back to the steps and almost ran up them, but these were mean steps that liked to cut up kids.

So he climbed the steps slowly.

And then, without looking behind him, he slowly opened the screen door.

He tried to open the inside door slowly, too, but it was stuck again, and he had to hit it with his shoulder and it almost hit the wall.

But he caught it again.

He slowly let the screen door close behind him.

And then, and only then, did he let himself turn around.

Colin bit his lip and stepped out of Grandpa’s boots so they were in exactly the same spot as before.

Then he wiped the snow off the egg onto his pajama pants and put the egg inside the toe of his own shiny black dress shoe to hide it. It wasn’t even cracked, even from being out in the snow and everything for a whole year.

He hung up his coat.

Then he shivered. He shivered all the way upstairs to the room where his cousins were still sleeping and drooling and farting and snoring. He climbed back under the corner of the blanket that his brother Douglas had left him and pulled and pulled on it until he had enough to sleep under. And he shivered some more while the coyotes howled.

Until six different coyotes howled under the full moon the Friday before Easter and he didn’t think he was ever going to sleep again.