[A bright light shines directly in author Robert Spiller’s face as the mystery Radical Equations is shoved into the spotlight] We haff questions for you…iff you know vat iss gud for you, you vill answer dem truthfully…

1. When you are working out the who-dunnit side of your Bonnie Pinkwater stories, do you use any tricks to keep track of all your clues and red herrings?  Do you have to get someone else to check them for you?  How soon do you give enough clues for the reader to work out the whole tale, usually?

First comes the basic plot: Who will die first, how that scene will be couched. Because each book features a particular mathematician, this drives not only some internal scenes but the title as well. Then comes the outline (which has all the clues and vague references where they will be revealed). This part is hand-written and is fluid and likely to be altered as time goes on. The outline also includes the tentative names of the characters: victims, suspects, sidekick (changes every book). As the clues are catalogued, so also are the red herrings, although these guys will be added to as the book progresses. The outline will only have about half the needed scenes (usually about 66). As I write the book additional scenes introduce themselves in various sections of the manuscript. Usually these include the one or two subplots that are necessary to make the story more than just the solving of the crime. In Radical Equations this was Bonnie’s relationship with the witch Rhiannon and her problems with her lover Armen Callahan. And if things all work out, the reader gets the last crucial clue at the same time as Bonnie. I have to confess, I don’t really have any tricks, but I have folks keeping me honest. I have been lucky enough to be part of some fantastic critique groups.

2.Did you use the puzzle at the heart of Radical Equations to inspire either the crime or the solution?  If not, do you use any mathematical or logical techniques to work out who your villain should be?  How do you pick out your villains?

Here’s the deal (I’ll get to the Bridges of Konigsberg problem [the central math problem from Radical Equations–ed.] in a second), every Bonnie Pinkwater novel contains a famous—at least in math circles—mathematician. There may be some mathematics used to solve the crime but in truth it is the mathematician who is connected somehow to the crime. In all four of the Bonnie Pinkwater mysteries (The Witch of Agnesi, A Calculated Demise, Irrational Numbers, and Radical Equations) the life of the mathematician helps Bonnie have an AHA moment. As for The Bridges of Konigsberg problem, that did double duty. It connected to the mathematician (who is in turn connected to the crime) but it also was key to the subplot involving a handicapped student.

[Which I thought was perfectly awesome–ed.]

3. Have you ever considered writing a pick-your-own-path book like the Choose Your Own Adventure series using math?  Get the answer right and live…get the answer wrong and it’s crocodiles for you!  In fact, do you have plans to write books for kids? You’re obviously interested in teens and what happens to them, with your math-teaching background and with the excellent characters you add to your books.

As for a Choose Your Own Adventure activity book, what a great idea. There is software out there that keeps feeding a person increasingly harder problems as they keep getting more and more problems correct. So, a person could encounter the first math problem–at, say, The Crossroads of Broken Hearts: Get it right and go onto Adventure A; Get it wrong, Adventure B awaits. As reader/players continue, their adventure is further modified by the answers they give. You’re a genius, Knippling!!

I have a YA series and a YA fantasy that have yet to see the light of day. I have faith they will, but for now, my next project is the fifth Bonnie Pinkwater book.

4. I know you’ve probably answered this question a thousand times, but…who is the inspiration for Bonnie, and how did you come to write about her specifically?  It seems like you have a lot of incidents with teacher who come into conflict with administration in your books–do you and/or your muse for Bonnie find it cathartic to play those conflicts out in fiction?

My inspiration for Bonnie is a very special math teacher (now retired) who I had the pleasure of working with for 18 years out in Ellicott (the model for East Plains, the town in all my mysteries). She was not only brilliant with a phenomenal memory (which was sometimes a pain in the butt), but had a lot of the quirks that Bonnie has. As for administrator problems, I was more trouble to them than they ever were to me. Every year, in all the places I’ve worked, administrators covered my butt after I would say or do something that would have them shaking their heads. I never had to work with anyone like East Plains’ Superintendent Divine (a.k.a. the divine pain in the ass).

5. What is the best thing that’s come out of writing the Bonnie Pinkwater books?  What’s your favorite fan story?

The fans are my favorite thing. I love getting e-mail from people who love Bonnie as much as I do. My favorite fan story is about a fan from Australia. He read The Witch of Agnesi and wrote me telling me how much it tickled him and how he wanted to read the rest of the series, but was having trouble getting the books in Australia. He and I corresponded for a bit and worked out how he could get the books. What makes this story unique wasn’t the fact he was from Down Under. It was his name, Robert Spiller. What was even more wacky was that like my wife, his wife was also named Barbara. I’m still friends with Robb Spiller.

6. What are you working on now?

The fifth Bonnie Pinkwater mystery, Napier’s Bones. When East Plains High School is excavating for a new baseball field, a twenty-five-year-old skeleton is unearthed, who is connected with an unsolved murder dating back to Bonnie’s first year of teaching. By the way, Napier’s Bones is a math toy used to teach children their times tables. You can buy them online or make them yourself from popcicle sticks.

7. I have to say thank you for solving a math puzzle that troubled me since childhood (my father is both a mathematician and a practical joker with a very straight face).  Where can your fans find you to get a) more puzzles and b) ask you for solutions to the math difficulties in their lives, just as an example, while being teased by the mathematically-inclined practical jokers in their lives?

As for more math puzzlers, every Friday, on my Facebook page there is a new math puzzle—solution on Monday. I invite all your readers to go visit my page and go nuts. This is also a perfect place to ask any math problem that crosses your mind. I would be so jazzed if folks would visit my page and pose a problem for me, or just unburden their difficulties. If they would like to pose a problem for consideration for a weekly puzzler, I would have to be able to solve it and judge its difficulty. However, here is a famous problem (The Towers of Hanoi) I’m considering posting in the coming weeks. Your readers can have a preview. 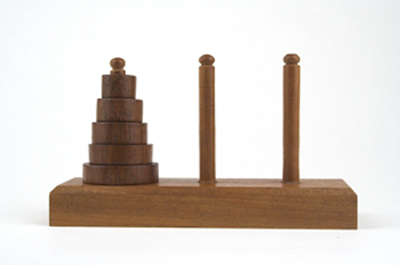 Consider the child’s toy that is composed of a vertical post with different sized concentric rings stacked on it (usually different colors with biggest ring at the bottom and the rings get smaller as they go up). Picture also that there are three such posts, with the other two empty. The trick is to move all the rings, one at a time, from the post that holds the rings to one of the other posts. There’s only one rule. You can move any ring you want but can never place a ring on top of a smaller ring.

Further consider the following: If you have only one ring, then it takes only one move. Pick up the ring, move it to another post. 1 move.

Naturally, the problem gets a whole more complicated with the more rings you have. Here’s the question: How many moves would it take displace 5 rings? How about 10?

DeAnna, have your dad work on this one with you.

[I don’t know…I’m waiting for a solution like, “No matter how many rings, it takes seventeen moves” or something like that.  Leg puller!–ed.]

One more thing. Periodically I give hints to the math problem, along with other gems of wit and wisdom on my blog: Spillerwrites.blogspot.com.