Over the weekend of the first, Ray and I drove out to Rapid City to see my Grandparents and other family, some of whom I hadn’t seen for…ten years? More than that?

Uncle Dan and Aunt Mararet were there from Reno. Surprisingly, they hadn’t changed much. Dan has gray hair. They both sound the same as I remember when they laugh, which, to my mind, is more important than anything else. Uncle Dave was there, my folks were there with all the sibs except Matt, and we caught up to Uncle Doyle and Sarah later on.

I think everybody that was older than I am got called “grandma” or “grandpa.” I don’t think we ever did convince Ray that my grandmother was my mother’s mother. And, of course, I had to hear old DeAnna stories about how similar I’d been at the age to the way Ray is now.

My uncle Larry (married to my dad’s sister Carol, the other side of my family), one day when I was three or four, told me that he had a key that, if inserted into my belly button, would cause my arms and legs to fall off. I said, “Do I look like I’m stupid?” and he replied, “Well, I’ll never make that mistake again.”

There’s another one, from about the same time, when my grandfather told me that if I didn’t quit sucking his thumb, it would fall off. Then he showed me his hand, missing a thumb. I don’t know what I said (the story doesn’t go so far), but apparently it didn’t work. My mother had to tell me that I couldn’t go to school if I didn’t quit sucking my thumb, and that was the only thing that worked.

Below is a picture that demonstrates a fundamental difference between Rachael and her mother: 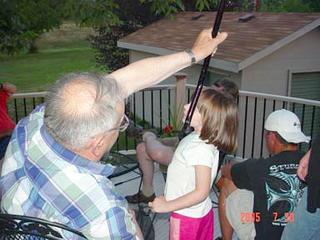 My grandfather (the missing thumb is on the other hand) is using his cane to strech Ray to make her grow faster. Afterwards, she will walk around the deck on tippietoe, her chest stuck out and her eyes as wide as those of a Pekinese, showing everyone how tall she is. “Wook! I gwowing and gwowing!”

I know that she doesn’t believe him, but she enjoys playing out the game, both the attention and making people happy, too much to call him out on it.

My daughter is a wonderful creature.