The Exotics: Tigerlilly (A Short Story)

Before Rachael was kidnapped aboard The Floating Menagerie…

Available at Smashwords, B&N, Amazon, and other online bookstores. 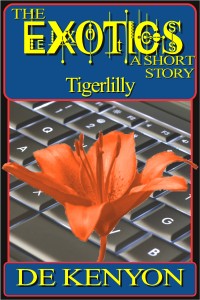 Rachael’s best friend from first grade, Brenna, wasn’t there on the first day of second grade, so she asked her teacher, Mrs. Sorensen, where Brenna was, but Mrs. Sorensen didn’t know either. She didn’t even know who Brenna was. When Rachael asked her classmates, most of them couldn’t even remember her.

It was like a nightmare she had dreamed once, where her parents vanished when the bad guy erased their names off a list. As soon as he had finished erasing and brushing the last pieces of eraser off the paper, they were gone. “You will be alone …forever!” It was an evil laugh, and she had woken up crying.

On her way home from the first day of school, Rachael asked her mother, “What happens when you die? Is it like being erased?”

Her mother gave her a weird look. “No,” she said after a while. “I don’t know if anyone really knows what happens. But you don’t just…disappear. Your body’s left behind, whatever happens to the rest of you.”

“Oh, good,” Rachael said. “Because Brenna wasn’t at school today, and I was worried that her name got erased and that she died when it did.”

Her mom gave her another weird look, this time a sad one. “When people die, it’s a little bit like they’re erased,” she said. “They’re gone, and you miss them, and you can’t do anything about it.”

She and her mother walked across the street, and Rachael said, “Is Brenna dead or not?”

“I don’t know,” her mother said. “I mean, I doubt it, but I haven’t heard from them since school got out. I’ll find out…but I have to warn you, she’s probably moved far away. That’s usually what happens when people don’t show up at school all of a sudden.”

“That’s okay,” Rachael said. “Then she can be my pen pal.” They were supposed to be pen pals with someone at another school this year anyway.

She didn’t have any homework ( yay!), so her mother let her play her zombie game until bedtime. Her father gave her kisses, then her mother. As her mother was kissing her, she asked, “Did you find Brenna yet?”

“No,” said her mother, sounding puzzled. “I had her last name and phone number written down for your birthday invitation list last year and everything. But now it’s like…like she disappeared. I’m still looking.”

Her mother kissed her again, but Rachael had nightmares about the eraser man anyway.

We live in a military town, so that means kids come and go suddenly: they vanish without leaving behind any way to contact them.  It never stops being heartbreaking to lose a friend into thin air like that.

The plan with these short stories is to do one for every main book…that follows a side story  that stands alone but weaves within the main books.

The Exotics: Tigerlilly (A Short Story)