New fiction up!  I’m trying out the Kindle Direct Select program, which means I have to leave it exclusive on Amazon.com for three months (May 20th).  I’ll let you know how it goes…at any rate, it’s only available via Amazon.com at the moment.  So if you happen to buy a copy but don’t have a Kindle, contact me with a screenshot of your purchase, and I’ll provide an alternate version for your ereader.  Being in the Select program means that I can’t sell the other versions from my website, either, but I don’t want to punish people who don’t have a Kindle.  So contact me. 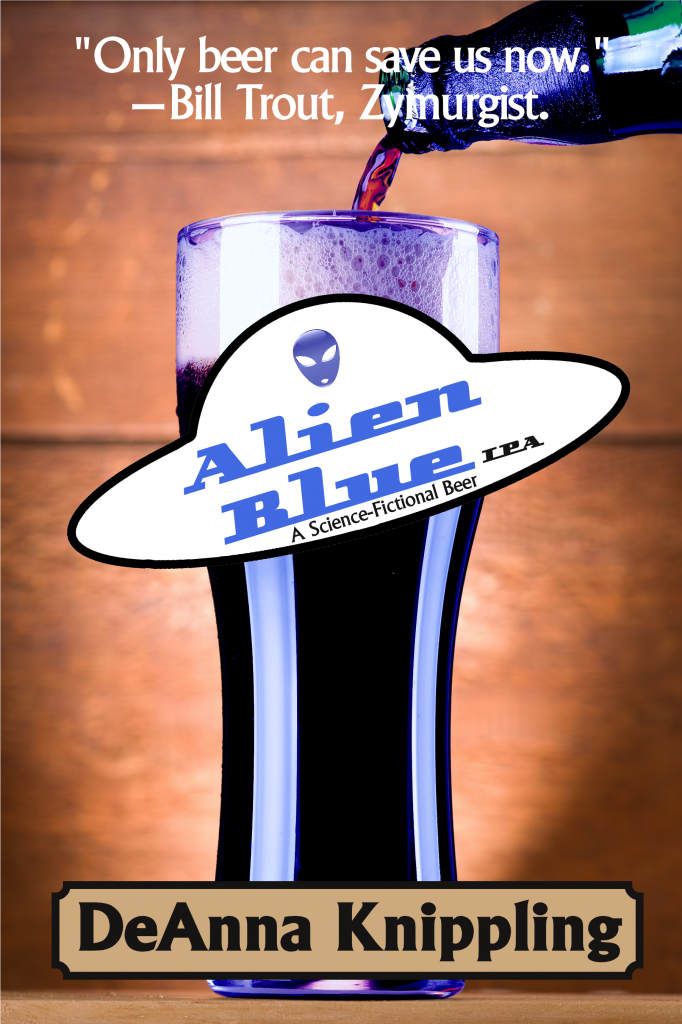 “Only beer can save us now.” –Bill Trout, Zymurgist*

Sci-Fi.  Bill Trout didn’t set out to get involved with aliens. He just wanted to run his damned brewery and heal up from being abandoned by his ex-wife. But that ain’t the way things worked out, and now he has some bodies to bury, an alien kid who’s wanted for murder—mass murder—to hide, and a planet to save. But Bill won’t go down easy.

Note: This the cowboy-hat-with-the-pink-band story. 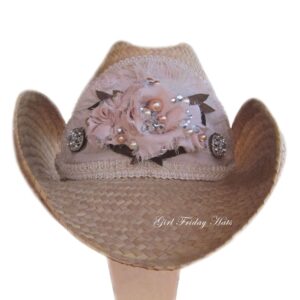 Just because Bill makes fun of it doesn’t mean it’s not fetching.

Rather than put a whole bunch of material up here, if you’d like to read a free (non-Kindle-specific) sample, click here.  But here’s the beginning…

The door of Bill Trout’s bar opened, and a couple of people pulled their guns out. The aliens weren’t supposed to come till dawn, but hell, who trusts an alien? Then the daughter Bill never knew he had walked into the bar, and his heart just about broke.

He knew who she was, because she looked just like her mother, except for her nose, and she looked about the right age for when her ma had left him. She let go of the door, and it jingled shut, cardboard in the hole where the glass should have been. Without a second glance, she walked past the diorama of the crazy caveman dragging his woman and fighting off a saber-toothed tiger.

The young woman’s jaw jutted out, and Bill had a flash of déjà vu of his ex. The bar, as any fool could plainly see, was packed.

The girl spotted the empty booth he’d left at the back of the room. “I’m here to meet somebody,” she said. “He’s supposed to be wearing a cowboy hat with a pink band. Have you seen him?”

The girl pointed to a table near the bar. “Isn’t that him?” Bill turned his head to look, and the girl made a break for the back booth.

He cussed at her back. “I shoulda locked the door.”

The Caveman Brewery, built into an old yellow-brick warehouse, looked almost festive with its neon beer lights, upside-down canoe, and garish, handmade beer posters, but the customers looked like hell, half-asleep and mean. Guns and booze were in evidence at every table.

Bill’s daughter switched her purse strap across her chest and braced her feet against the base of the table. “I’m staying,” she said, when Bill followed her.

She glared at him and said, “I need to meet my dad. I don’t know who he is. He has cancer and he’s going to die and he didn’t even know I was born.”

But she wasn’t stopping. “Mom wrote him a letter telling him to meet me here today. He’ll be wearing a cowboy hat with a pink band and carrying the letter from Mom, and some dumbass waiter isn’t going to screw this up, so bring me a beer.”

The woman shouted, “I said I want a beer!”

Then the bells over the door tinkled again, and a tall, dark-skinned man—so tall his head brushed the bells—stumbled into the room, almost falling into the diorama.

“Hang on, miss,” Bill said, and, “God damn it, Anam.” He beelined over to the man, jerking him upright. “I told you to get the hell out of my town!” Anam, whose filthy, ragged shirt and pants were smeared with either wood stain or blood, grabbed Bill’s arm so hard he found smears on it, later. As Bill struggled to push Anam back out the door, his heart shuddered, and he sagged at the knees, wincing, and Anam had to wrap an arm around him to hold him steady.

Then Bill realized what Anam meant to do, and he stopped fighting. “You fool,” he said. “You damned fool.” He pointed Anam toward the patio. “Go. I don’t want you in my sight.”

Anam pulled himself along table by table, until he reached the door. He put his head on it, tried to pull it open while he was still leaning on it, jerked harder, and almost pitched himself backwards on his ass. The springs of the door creaked as it opened, then slammed the door behind him.

Bill passed a hand over his face. There was no going back now.

The folks in the bar started whispering again, and Mimi rushed up to him, twisting a towel around and around in her hands, dripping water. Her lips were almost white, her black-and-purple hair tangled like snakes.

“We’re all getting erased, one way or another,” Bill said. “She’s been sent to get a true record, so…well, so we can get our memories back later. Only she don’t know that. Later I’m going to have you take her to the bathroom and get the recorder off her…probably in her purse somewhere. Her ma would have planted it there, without her knowing.”

Mimi gaped at him, her mouth open, showing her delicately-disordered teeth. She had become like a daughter to him, or even closer: like an employee. “So that’s what Smart Bart was doing.”

“I better get back to it.” He turned around and limped back to his daughter’s booth. “A cowboy hat with a pink band, huh? All right, missy. I changed my mind. You can stay till your dad shows up. But you got to promise me something.”

Her eyebrows met in the middle. “What’s that?” She was pretty in a in a bad-posture, ugly-duckling way, somewhere between sixteen and twenty-five. Bill hadn’t seen her mother for twenty-two years, which should make her just barely legal to serve. Ah, just look at that nose. It was his nose, before it got broke. He woulda sworn on it.

“You got to try this new beer I been working on. I make most of my own beer, you know. This new one’s called ‘Alien Blue.’ On the house.”

Bill gestured toward Sam, his bartender. The party pump under the bar wheezed like an asthmatic poodle as Sam pulled most of a pint for the woman.

Bill stumped over to the bar and picked up the blue beer. His hands were shaking, but he didn’t spill a drop as Sam handed it to him.

“Good riddance,” Bill said. He brought it back to the girl. “Come on, try it.”

“Thanks.” The woman took a deep, thirsty gulp. Plenty. Then the taste hit her, and she put the mug down and shuddered.

Bill laughed despite himself. “What do you think? Good stuff, huh?”

She forced herself to stop gagging and gasp, “It tastes like monkey piss.”

Bill flashed a big-ass grin at her. “Aw, didn’t like it, did you? Well, it does have a funny aftertaste.”

She swallowed her own spit a couple of times, trying to get the taste out of her mouth. “So why is it blue?”

The woman sighed. “A long story would be good. And some water. Or something. I need to kill some time until my Dad gets here. Besides, I collect stories.”

“Really? You a historian or something?”

Bill laughed. “A writer? Figures you’d be a liar.” Before she could ask Bill what he meant, he said, “Well, I’ll make sure this guy who’s claiming to be your dad’s on the up and up; I know most folks who live within a hundred miles of here. What’s your name?”

Bill held out his hand. “Pleased to meet you. Bill Trout. I own the place.”

“And I called you a waiter.” Nina put down the blue beer to shake Bill’s hand and winced when Bill squeezed the hell out of her fingers. “Ow!”

“Sorry.” Bill let her go and grabbed the blue beer before she could pick it up again. “How about I just dump this out. Wait. I think I’ll put it in a lead-lined keg and bury it with the radioactive waste out in Nevada.”

“Oh, honey, it was worse. Sorry to pull such a mean joke on you, but it was for a bet. Now, how about some wheat beer, little touch of clove in it? I call it A Hard Day’s White.”

“Uh,” Nina paused. “I guess I could try it. If you’re done playing practical jokes on me.”

Bill laughed. “I’ll give you the good stuff now, I promise. I’ll even throw in a couple of Reubens and a basket of fried mushrooms to take the bad taste out of your mouth.”

Nina smiled the kind of smile that makes men propose, with dimples. “Please?”

Bill smiled back like he couldn’t help it, then turned his head and bellowed, “SAM, PAIR OF WHEATS, FAT KRAUTS, AND A BASTARD OF HATS.” His voice echoed above the crowd, through the air ducts and the rafters. He confided, “Me and Sam couldn’t remember any genuine diner lingo when we opened, so we made some up. More fun that way.”

Bill walked into the back of the house and poured what was left of the beer in a plastic bucket, then added an equal amount of Everclear that was sitting next to it in a jug. He could hear the people out front muttering at each other, a susurrus that had gone sharp. Well, let ‘em.

He came out, sat down at Nina’s table, and said, “So the beer. It all started with the mayor, Jack Stout. If you knew Jack, you knew that he was full of damned good intentions unmoderated by a lick of common sense. Tonight’s his wake—” Bill broke off and wiped his face.

Then Mimi showed up with two mugs and a basket of mushrooms. “You okay, Bill?”

Bill put his grin back on. “Just thinking about Jack. I’ll be fine, I guess. Why don’t you check the patio? You haven’t been out there for a while. Somebody might need something.”

Mimi glanced over at the door Anam had gone through. “Sure,” she said.

As Mimi left, Bill said to Nina, “I gotta say, missy, I sure am glad you came along.”

“Fair enough,” Bill said. “Thing is, everybody here knows the story except you, and I got a hankering to tell it one last time. Hell, it’d make a good novel, you ever feel like writing it up. You can use it; just change the names, okay?”

*Someone who studies the practice of fermentation, as in brewing, winemaking, or distilling.