The robots won’t know what hit ’em this weekend only with a free coupon code at Smashwords: KW79G. 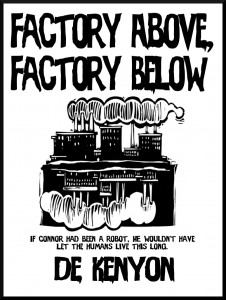 If Connor had been a robot, he wouldn’t have let the humans live this long.

“If you’re really bad,” the Teachers had said, “the robots will come and take you Below.”  Well, Connor had been really bad this time, and now the robots were coming.  Connor couldn’t wait.

When you were bad, the Teachers told you stories about the Below. The robots had taken over everything Below, and they would kill any living person, animal, or even germs that somehow got Below, in order to keep their environment sterile. How that could be when any fool could see that flushing the toilets into the sewers brought a lot more germs into Below than a person accidentally falling through a hole in the street or something, Connor didn’t know. But that was the Teachers for you, smacking you across the hand with fake wood rulers for asking perfectly logical questions.

“If you’re really bad,” the Teachers had said, “the robots will come for you, and take you Below.”

Well, Connor had been really bad this time.

As far as Connor was concerned what he’d done to be threatened with Below wasn’t either terribly bad or terribly important. He’d tried to burn the school down, was all, and it wasn’t like the place was made out of wood or anything. He was studying the way the extinguishers worked. Not the way they were made, which was something you could look up on a terminal. He wanted to know how they worked. If three rooms out of four in a quad were on fire, would the fourth one’s extinguishers also release their chemicals onto the plastic desks and the industrial carpet and the whiteboards (and the children)? Would the extinguishers be able to tell what type of fire it was and deploy the correct type of extinguisher? How fast would the children be evacuated? Would the Teachers protect just the children, or would they also try to protect other materials—and, if so, what?

Unfortunately, he was stopped before he had many of his questions answered, but he learned that the fire safety systems were not as advanced as they could have been. He also gained the impression that the Teachers were far more highly trained in controlling students than they were at controlling blazes.

All the children were safe—but if there had been a real fire, that is, one that Connor didn’t have under control, they would have been dead in a minute. The Teachers locked down in their classrooms before the children could leave. With the fires still burning inside. As the gas from the fire extinguishers released. In fact, the Teachers did not attempt to rescue the children at all, but quickly checked their desks (for what, he wasn’t sure) after calling, “Face the wall and cover your mouths and noses.”

He had recorded all four sets of teachers in all four rooms, and they had all reacted the same way, even the teacher in the fourth room in the quad, which hadn’t had a fire at all. After the fires were out, and they would have gone out anyway, all the other kids were sent upstairs to the dormitories and classes cancelled. Connor heard a cheer as Miss Mackenthal, his Teacher, herded him down the hall to her office.

“Connor, what are we going to do with you?” Today she was wearing a pink fuzzy sweater and a fake pearl necklace with a big scratch on it that Connor had recorded as being worn by another of the teachers, Miss Rumsey, two years, one month, and six days ago.

“Did you want a serious answer, or did you just want me to shut up?” Connor asked.

“That doesn’t make any sense.”

“You sound more like a robot than the robots do,” Miss Mackenthal closed and locked the door of her office and sat at her desk with her head in her hand and her elbow on her desk, which looked like used, banged-up gray tin but was really new, superhard plastic. Connor’s ears perked up. Had Miss Mackenthal been in contact with the robots? “Connor, I’m sorry. What we’re going to have to do is send you Below.”

Censorship by Any Other Name