Look for justice somewhere between love and revenge for free this weekend with Smashwords coupon FX95H. 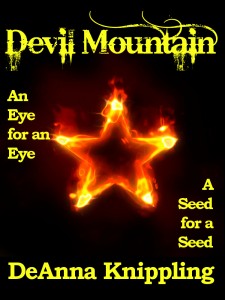 The alien called him her beloved devil for tempting her away from her brood and tried to make him promise not to take revenge if the other humans turned on him. Now he’s on top of Devil Mountain, looking down at the town that murdered his wife, and he has no promises to keep.

Hank dragged me out of the mining sled on my back. I bunched myself up in a ball and got ready to kick, either him or the door of the sled as I went past, just to try to throw off his balance, but he didn’t put the ramp down, and the rock knocked the wind out of me. I was lucky I didn’t crack my spine.

By the time I could really get a breath again, he was back, holding the processers—five of them—in his hand. “You watching, Farrod?” he asked.

I gritted my teeth around the gag, which was about all I could do.

For a fat guy, he’s quick. Three strides forward, and he threw the processors off the side, into the rocks like a javelin thrower, his whole body like a whip. All I needed was to find one of them to fix the sled to get back down the mountain, but it would take some doing.

He pulled his rifle out of the holster on his back. Didn’t aim it at me. “You going to be all right if I cut those ties?”

I gritted at him again.

“I better cut your gag anyway,” he said. “Don’t want you to choke on your own bile.” He put the rifle down, far out of reach, and loosened the snap of his sheath. He took a step toward me and waited. Another step, to where I might be able to roll quick and try to thrash out at his legs.

Oh, it was tempting. I knew, deep down in my heart, that he’d done it. He was the rotten son of a bitch who had killed my wife. Nevermind that he’d been with me the whole time. He was with them. He was the one who had kept me in the mines an extra week, extracting iron ore for the damned spacers that came through for parts.

Another step, and my eye started to twitch. He walked back to the gun, sheathing his knife. Damn it. He knew me too well.

“I guess you’ll just have to be okay,” he said. “Try not to vomit, Farrod. I’ll keep an eye on you, but we’re done until morning. And try not to piss yourself.”

Back from Road Trip.