New short story release, a horror/suspense tale in the vein of Twilight Zone… 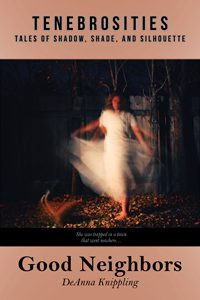 What makes the fae so terrifying is how subtle they are…

One foggy night, Lee Warnick waits for her dad to come home from the factory. Lately, more and more people have been disappearing from her small town, and she feels that her family might be next.

No one else will talk about it, but Lee knows the truth: the fae have been abducting people, on the nights when the fog rises up.

Haunted by nightmares and terrified for her family, Lee must find a way to keep the faeries from striking again…

Lee Warnick leaned her head on her arms and watched out the window. Her mom said, “Come away from the window, Lee, why don’t you call your friend Jenny? Or watch some TV?” but Lee ignored her. Her dad was working late at Smithfield Parts Fabrication—the factory—that night, and she wanted to see him come home.

Her mom wasn’t fooling anybody. They were both nervous.

That day had been one of those fall days that are too beautiful, too perfect. The sky was a clear and artificial blue-green, and the leaves rattled as they tumbled along the streets and through the parks, picking up strays. Everything had come easy at school. For example, almost everyone had gotten an A on the math test from last week, and nobody had gotten lower than a C. The worst thing that had happened was that a couple of senior boys were smoking behind the building and had made rude comments to her, but their hearts weren’t in it. It was the kind of day where no elementary school kids were beaten up for their lunch money, no stray dogs were kicked, and no soufflés went flat.

Those days, those days. Those terrifying days.

About four o’clock the air turned damp and cool and wet. “It’ll be foggy tonight.” About a dozen people called her mom to tell her that, as if she didn’t know. With her husband working late at the factory tonight. Driving home in that fog.

But that was it, wasn’t it? Nobody knew. Nobody knew why some people, on foggy nights in the town of East Smithville, just flat-out disappeared.

Or rather, everyone knew why. The fairies took people.

They would take one or two or three or six people a year. The records went back to 1875, and there were no years where no people were taken; the most was six, although one of them had looked more like a crib death than a taking, at least to Lee.

But it could have started before 1875. That’s just when the records started.

The question was: how did the fairies decide who to take?