So if, as a writer, you’re supposed to take feedback from readers, critique groups, reviewers, etc., with a grain of salt, what is that grain of salt?

My thought is this:

“Would the suggested change help satisfy my readers?”

I think that’s it.

Next time you get a comment you’re on the fence about, ask the commenter (unless it’s a review; just leave that shit alone),

“How will this help satisfy my readers?”

If they can’t explain, or if the answer is, “But that’s how you do it” (or “But that’s what’s grammatically correct”), then ignore it.  If it points back to some kind of arbitrary rule or system, but not back to a reader, then it’s ego and bureaucracy talking, not inspiration. 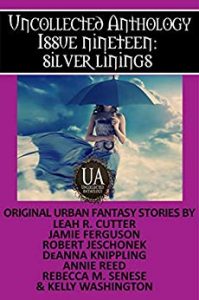 Discover how to negotiate with demons and survive a night on the street. Sniff out a pesky ghost or hunt down a creature at night. Attend a fairy ball, overcome inner darkness or speak with the wind.  7 stories about the one thing in the dark that pulls you onward: hope!

Pink-haired goth Tiff Cordero isn’t a witch.  She’s a clairaliant, someone who smells spirits. And she’s been hired to sniff out a ghost who has recently started to give migraines to the patrons of a local coffee shop.

Only problem:  nobody’s died anywhere near the building recently, no one has cursed the place, and the only odor Tiff can pick up is the smell of burnt plastic.

If she can’t solve the case, all the cool patrons will ditch the coffee shop—and it’s already in a neighborhood getting updated and plasticized out of existence.

Have all the stories already been told?

In other words, how important is originality in fiction?

Should you be trying to write something original?

First:  what makes you think you would recognize originality if you saw it?

When I was reading slush for several online magazines, I would run across the same idea over and over again, written by people who clearly had no idea that anyone else had written that idea before.  Because I mostly read darker stories, I liked to joke about the “Oh no my ex was murdered by a monster and I could do nothing–nothing–to save them!” stories.

Which I saw a lot.

There’s even a particular type of story that seems to be written by people who think they’re being original.  I call it “the asshole’s downfall,” and it mirrors the hero’s journey described by Joseph Campbell and others:

Tropic of Cancer, Requiem for a Dream, pretty much everything by Bukowski, The Woman in the Dunes, the list goes on. Rabbit, Run.

Both the author and the people who like that kind of thing seem to think each new iteration is fresh and original–and, compared to the endless iterations of the hero’s journey that we’ve been getting lately, it is.  Some”asshole’s downfall” books are very good, even.

The point is not that they’re bad.  The point is that the story gives the illusion of freshness and originality, but doesn’t actually provide it.

In other words, there’s a difference between originality and the appearance or feeling of it.

Second, if you did write something truly original, who would want to read it?

A truly original book is only going to succeed with an audience if it supplies an original need.  Otherwise, it’s a curiosity at most.

So, if not originality, then what?

I suggest being specific instead.

The way you see the world will never be exactly replicated.  The place, the time, your point of view and opinions, the context of the audience you’re trying to reach–those things can never be replicated.

Kafka wrote some strange works, but they resonated with his German-speaking Jewish audience in Prague, who often laughed their way through the dark worlds he created.

American Psycho was published in the aftermath of the 1980s, by a New York writer running on empty.

Even something really unusual like If on a Winter’s Night A Traveler comes from, and contributes to, a group of metafictional writers and semioticians who are exploring what meaning itself means.

Don’t be original.  Be specific.