The story I was so nervous about has had four crits. There’s a “thing” in the story, and I didn’t explain what it was or where it came from, because I want people to read into it — to come up with their own explanations, put their own pasts into it.

Everyone has called it creepy and well-written. Three people seem to have found the ending frustrating, because of the lack of information. One person didn’t. Two people decided that the thing was cancer — which wasn’t the story I’d come up for it in my own head, but that was okay.

What a roller-coaster, though. It’s been painful to read the reviews, both good and bad. One minute I’m brilliant; the next I’m an egotistical @#$%-up who’s never going to pull this off.

I’m going to screw around with it a bit more today, beg Lee to read it, and send it off in the next week or so. I’m going to shoot for The Third Alternative first, I think.

I’m screwing around with stuff… 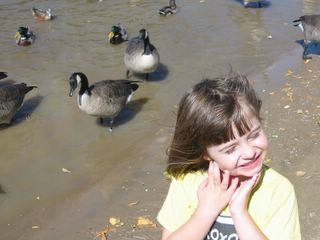 I joined the Online Writing Workshop for SF, F, and Horror a while back, intending to get feedback on my novel, Gods of Gray Hill. As they say, “you get what you ask for.” Most of it has been really good, but I have to brace myself every time I see a message in my inbox letting me know I have a new review.

I’ve had only one “I don’t get it” review; the rest have all been painfully helpful. The story really is coming out of my head and forming on paper, finally. I’ve still bitten off more than I can chew, but if I can pull this off, I should be able to do pretty much whatever I want to.

Anyway. I finished a particularly agonizing revision of an early chapter and decided to reward myself by going over an old short story and posting that to get feedback.

The story is called “Things you don’t want but have to take.” I wrote it one day while sitting in a systems class for work, because the instructors have to repeat everything they say six times and then answer questions. I originally submitted it to Weird Tales. The guy that read it sent a short note, stating in no uncertain terms that he didn’t get it and that it was too weird. No strong language, no gore. Go figure.

I reread the story, and it gave me the creeps, so I decided to do a little editing and send it off. A week later, I just posted it.

Tell me why I’m positively twitchy about this story, having spent all of maybe ten hours on it both then and now, when I’ve spent years on GH but only need a little bucking up to face crits on it.