Before Christmas, I asked Ray if there was anything she wanted–thinking about something easy, like a trip to the zoo or a video game.

I want to color my hair orange, she said.

Here’s the deal:  Ray doesn’t @#$% around when it comes to hair.  The last time I put off getting her bangs cut a little too long (in 2007), she gave herself a home trim that involved removing a pile of hair comparable to our guinea pig.  And in the sixth grade she started pulling out (and eating, as it turned out) her hair.  It was almost exactly a year ago that the doc pulled me out of the room and told me that Ray had a mass in her stomach.  A trichobezoar.  She had to have surgery to remove it–hair’s pesky stuff, and you shouldn’t a) drink drano or b) let that stuff move into the intestines if you can help it.

I talked her down to an orange streak, warned her that she’d have to pay for it herself, and said that we’d have to do some research.

But I knew there would be no getting out of it.  Somehow, someway, there would be orange hair.  If I wasn’t committed to helping her get what she wanted–I shouldn’t have asked.

This is less permanent than ear piercing, I told myself.  I don’t have a thing about hating hair color or anything.  It’s just a big change, and a reasonably big pain in the butt, and I fully expect there to be fallout, although probably not from the school unless there’s some hypocrisy going on.

I don’t know why.  I like oranges, I like sunsets, I liked fall leaves, etc. etc.  I like a lot of things that are orange.  But the color orange, as a decoration?  It’s like tasting artificial strawberry flavor.  You know it’s supposed to be “delicious,” but all you can taste are the chemicals.*  The subtleties are lost.  Orange.  Maybe it’s that it’s nearly impossible to rhyme.**

The wheels of progress ground slowly, what with one thing and another, until yesterday, when we slammed out of early-release day at school and got into a salon.

The woman at the door had a colored streak in the front of her hair: blue that shifted gradually into purple.  A sign, I thought.

We talked to her, got an estimate, signed some papers confirming that yes, we really did want to color Ray’s hair, and…the stylist announced that she needed to go to lunch.  At 2:45.  So that she wouldn’t be doing this on low blood sugar.

We left, walked to the pet store down the row, diddled around while Ray babbled about the fish.  I did not ask her whether she really wanted to do this.  She pointed out: all the snails, all the dead fish (and the fact that one of them lit up yellow in the black-light tank, which she found helpful), which fish were her favorites, why some fish are see-through (so that their predators will a) not realize they are fish, and b) if they do see them, think they are floating skeletons and not worth eating), the fact that the one starfish had six arms (three of which were stumps), moss balls anchored to rocks by fishing line, the way some of the rocks glowed in the black lights, bamboo plants, a snake, turtles, every cricket in one particular cage, all the frog hideout locations in the frog tank, the fact that she didn’t care for birds, the fact that I wasn’t saying much, that she was talking too much and she was sorry, that she was excited about getting her hair done.  More than once.

We briefly wandered around an office supply store; she told me that the worst kind of desk would be a square one that surrounded her on all sides, so there was no way to get out.  She would hate a desk like that.  Three sides were okay, but not four, also, she was babbling again and she was sorry and she was excited about her hair.

We went back to the car to pick up a book for me to read–and the hair stylist burst out of the door.  “Are you still doing this?  Are you?”

I had to laugh.  It looked like we were leaving.  A dramatic moment.

Ray’d been waiting to have her hair cut for a while.  After the hair-eating stuff started, she’d stopped wanting to have her hair cut–but we made her, after we found out about the lump in her stomach, just to make sure the temptation to eat more of it was gone.  It was a hard one: half her head was bald.  The stylist did her best, but it still looked rather odd, especially because Ray’s hair started growing in curly.

After the surgery, she didn’t want it cut because–because.  Just because.

We started with bangs, and the story came out, or most of it, because I have TMI and I will tell you pretty much anything that hasn’t been specifically labeled as a secret.  And because Ray and this woman were pretty much sympatico.  It turns out she was going to do a My Little Pony cosplay shoot this weekend, as several ponies but not–and they both agreed this was one of the world’s small injustices–as Rainbow Dash.

Bangs, wash, bleach in foil (there was this interesting thing she did with a metal comb to get a straight, neat edge at the end of the foil, which was to wrap a loop of foil around the comb), then waiting.  I sat next to Ray in an empty salon chair.  I always do.  Not because she’s scared or anything; she’s just the kind of person who’d always rather have company, even if you’re not talking.  While we were waiting, the stylist did a boy’s hair, transforming him from a stubborn lump into a cool dude with spiked hair.  Rinse out bleach.

And then the orange.

Why orange?  Because she’s designing a MLP character named Pumpkin Spice Pony.  Or “because,” really.  Just because.***

A few minutes later, the stylist was cutting the boy’s brother’s hair, then styling it.  He wanted to know how old Ray was, that she was being allowed to get her hair dyed, then explained in a laborious fashion that he was in the fourth grade and that he was going to live in North Carolina for two years.  He kept eyeballing me, the mother.  Whatevs, dude.  She can have orange hair if she wants.  Just because.

He yelped as she forced his short hair up into a jaunty flared peak in front–not a mohawk, just a flair at the front edge of his very short hair.  I lack the language for describing the style, but it looked vaguely Dolph Lundgrenish.

“Suffer for your fashion!” I said, and he stopped and looked at me again, then at Ray, then back at me.

Hair rinse–the color on her hair looked off, didn’t match her glasses.  Then the hair trim, and the stylist went off about how Ray’s hair hadn’t been cut in a while.  I told her it was complicated.  We learned that the curliness might have been due to the hormone changes of teenagerdom:  everyone’s hair changes every time their hormones change.

As her hair dried, the orange became brighter and brighter, until finally the stylist took a blow drier to it, and then it truly came alive. 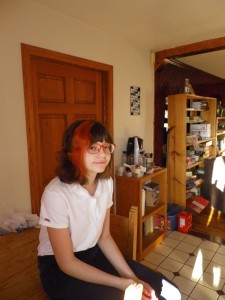 We got lots of tips, including the warning that Ray’s pillowcases were toast, so we stopped at Goodwill and picked up a couple of used ones, because I want to keep the ones she’s using for the guest room after we move.

As we left–and yes, I got the stylist’s email–Ray gave me a hug that so far surpassed other hugs that tears welled up in my eyes.

Here’s my daughter, moving into herself. 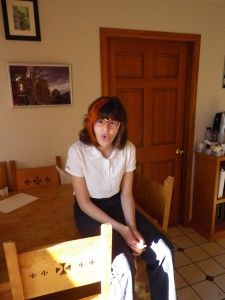 New rule to add to list of teen-rearing rules:

Just look what my daughter decided to do.  It’s so beautiful.

*Somehow I never have this problem with mango or raspberry.

**Words that rhyme with orange.  Also, you use more than ten percent of your brain, and cognitive bias happens to everyone.

***Fortunately, I learned last summer from my sister Betsy why because is important.  I asked her why she got her ears gauged–I missed the particular window where it makes innate sense, so I asked–and she said “Because I can” with this particularly rebellious look in her eyes.  Something clicked.  Because she’s in charge of what makes her happy.  Because it’s her body, not her parents’ or siblings’ or boyfriend’s or religion’s or society’s or anyone’s.  Because her skills are more important than her appearance at her job.  Because.  Just because.  It’s important.