This story was originally published in Crossed Genres #30. 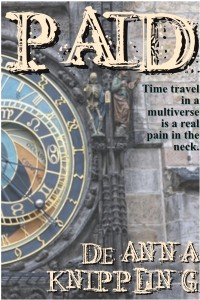 Time travel in a multiverse sounded great…except that some of inventor Beauregard’s alternate selves aren’t so nice. Now he’s a private dick hiring himself out to try to clean up the mess he made.

Beauregard is called to investigate the gruesome death of a girl who was crushed to death while her babysitter watched TV downstairs. Due to the nature of the death, he already knows that the Outlander—a version of himself trapped outside the multiverse—is involved…but how?

I came up with a solid time travel theory in 2007 and swore I’d never build an actual machine. I built it 2009 anyway; long story. If you’re reading this, it means you’re stuck here with me—or you are me. Sorry about that. Any set of universes in which someone discovers time travel tends to implode, because the set tends to attract the mass of all the different versions of the time traveler in the multiverse.

Some versions are pretty big. I see them when I travel. Quantum foam: it sounds small, doesn’t it?

I looked past the spinning rings of the Eclectolux at the boiling, purple-green mass below me (that is, if you consider below to have any meaning); it looked like living vomit that had just eaten its way out of a dog. It looked as big as the Cities when you’re flying into MSP, but it was actually much bigger, because I was very far away.

Yeah. Another version of me. I call it the Outlander.

I dropped the glass vial through the bars of the Eclectolux. The vial twitched as the bars whooshed past it, then fell out of sight, toward the foul city of me. The city had seen me (that is, if you could consider what it does seeing) and was sending up tentacles the apparent size of the Empire State Building. The Eclectolux dipped as gravity distorted. I popped out of the foam before the tentacles got within half a thousand clicks. My job was done.

I came to in the storage unit. The three rings had stopped spinning, as had my stomach, so I must have been there for a while. The gunshot wound in my stomach was gone, which meant I’d died and been replaced.

Damn it. Every time I had to be replaced, the universe opened another hole to the Outsider, and it would be another race to see who found it first (that is, if first could have any meaning with regards to time travel). Ordinarily, I wouldn’t have minded being dead. It was not being able to make it stick that got to me.

I shut off the Eclectolux, turned off the generator, and flicked off the lights. Outside, Durwood, as big and hairy as a mountain gorilla, with a similarly-sloped forehead spackled in orangey curls, sat in his 1975 Chevy Caprice Classic convertible, cherry red, top down. He saw me and honked the horn six times. I hated that car; it clashed with his hair and the top never worked when I wanted it to.

I crossed the street. “Stop that.”

He honked the horn again. “When are you going to let me handle the Eclectolux?”

I pulled up my shirt and showed him my stomach. Durwood groaned, and I tucked my shirt back in.

“Back to the office then?”

I nodded, got in the car, leaned the seat back, pulled my Akubra over my face, and went to sleep.

This story came from…a series of chess games, I suppose.   I was working with a guy who liked to play chess; we set up a board on the cross-piece of our cube walls and made moves with no time limits.  He’d played a lot of chess in prison–he wouldn’t talk about it, other than to say, “Sometimes getting revenge isn’t worth it.”  Fair enough.  He was this enormous guy, width-wise, but not terribly tall, say 5′ 9″, and his hair was cut off flat on top: which, to my mind, made him look even shorter.  Hands, same way: their width made them look very stubby.  But he never was clumsy with the chess pieces.

I’m an indifferent chess player; I just like to talk to weird people.  But I got a lot better while playing with this guy.  He talked a lot about kinds of choices you can make in chess.  I don’t know if I can remember how it all went now–there are opening moves, which have all been pretty much worked out; there are endgames (I asked him how to know you were in an endgame; I wish I could remember how he’d explained it, but I know the feeling of it still, if not the logic) that have been all worked out; there are groups of tactics that happen in the middle.  There are groups of things that happen over, and over, and over, with only minor variations.  Once you know the patterns, it becomes easier to predict the outcome.

He said that chess was what made him realize that revenge was a bad idea, that chess was all about anticipating the consequences to your actions, and how he hadn’t had a sense of consequences, before he started playing chess in prison.  Still, he wasn’t the wisest guy I ever met.  But pretty damned smart.

Somehow, being me, I didn’t walk away with all that much in the way of chess.  But I did get an idea for a story: about the guy who discovered time travel and subsequently wished he hadn’t.  I had this whole plan for a series of short stories for Beauregard, based on the Major Arcana of the tarot.  This was supposed to be #0, The Fool.  It went all right.  But when I tried to write #1, The Magician…ugh, I couldn’t do it.  Now I can see that it should have been an origin story.  But anyway, back then I skipped to #2, The High Priestess, which was supposed to be about Beauregard’s secretary…well, let’s just say there was waaaaay too much duct tape, so I let it be.

I might write at least the origin story some day.  Then again, maybe not: ever since  writing this story, I’ve had a sense that somewhere out in the multiverse, I’m writing every possible variation of every story I’m currently working on.  It’s distracting, feeling like every word I type spawns a different universe, then making a typo and deleting a word, and wondering whether I just deleted an infinity to go with it.