I are a writter.

I see it all the time when I’m looking for freelance work to pick up.  People who are searching for a “writter.”  I have to laugh…those jobs are like time bombs.  You know that you can do some good there.  But you also know the person you’re going to be working for…won’t have a clue about the effort you put into it or whether your work will produce the results they want.  They won’t appreciate what you did.  They might be grateful that it’s done.  But they won’t actually know what it was you did.

This week is “abundance” week in The Artist’s Way, by Julia Cameron.  Money week, that is.

And I answered them with things like “If I had money, I’d waste it.  Or hoard it and then waste it.”

In short, I found out that I have extremely negative attitudes about money.

But as the week went on, I found myself digging deeper and deeper into the idea of “worth.”

And things like that.  I have just been going around and around on this all week; I was considering doing this week over again, because I clearly had so many negative emotions about money, a horrible sense that I wasn’t worth anything (period), and that I would have to fight tooth and nail for what little I have, or it would disappear: that “frivolity” was a waste, a horrible waste.  Ugh.  It’s just been painful digging down into that and finding things out like, “I waste money because I won’t give myself permission to spend it on what I really want, so who cares what I spend it on?”

At the same time this week, I’ve been rereading a lot of Terry Pratchett (who has The Long Earth out with Stephen Baxter this week, and yes, the copy arrived yesterday).  At first, it was because I needed some Granny Weatherwax.  I had a conundrum that I couldn’t figure out on my own, and I needed her point of view, as it were.  (I can do that with books: reread them to pick up a point of view and use it to help process things.  I suspect everyone can, who’s a reader.  But I do it on purpose.)  And it worked like a charm: I sorted out the answer, added a thick SLAB of tact, and moved on.

But then I kept reading more Terry Pratchett–including some of the Rincewind books. 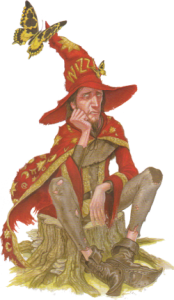 If you don’t know the Discworld, Rincewind is one of the earliest characters to show up, yet rarely makes an appearance in the later books.  He’s an incompetent coward of a wizard, and he wears this hat that reads “WIZZARD.”  You’d think he was the lamest character ever, and wonder why anyone wrote books about him.  I did.  Lee finds Rincewind grating.  I don’t know of anybody who goes, “That Rincewind, he’s my favorite character.”

In the books where he shows up, he usually:

Here’s an example of someone who doesn’t want to be a hero, who’s damned good at it.  And I generally look down on him.

But this morning, I was writing along in my morning pages as part of the weeks’ assignments and messing around with the idea of my value as a writer and whether or not I thought my writing was worth what people paid for it.  –And for some reason, I broke off in the middle of that idea and started writing, “But it doesn’t matter what I’m worth.  It doesn’t matter whether my writing is ‘good enough.’  I am a writter, and it is what I am and not what I do.  You cannot take being a writter away from me any more than you can take being a wizzard away from Rincewind.”

And it’s true.  I don’t have to have “value” as a writer.  It isn’t just a craft, where I can do techniques and jump through hoops better than anyone.  It’s something I am.  Even when I don’t write, even when I write terribly, I am a writter.  Incompetent?  Cowardly?  Writter.  I still writt when I sit down with a pen in hand.  My readers might mock me when I’m done–but I still performed that function.  I wrott, and they read it.

The rest of it doesn’t matter, does it?

So there’s Rincewind.  A character of questionable “value” who nevertheless gets the damned job done, not because he can or he’s the only one who can, really, but because that’s who he is, and someone backs him into a corner where he must perform his function.  A character who shows up in the early Discworld books…then fades away.

I have to wonder if it’s because there really wasn’t anything else that he needed to teach his writter.