I don’t know that I’m the world’s best synopsis writer, but recently I’ve improved.  I was at a meeting for PPW this November, and Chris Mandeville gave a talk on getting unstuck.  Talking to her afterwards, she mentioned something she called a calendar that she used to keep track of the short version of what was going on in her stories.

Anyway, what you do is you make a grid kind of like a calendar–four weeks, seven days.  Fill in all the blanks with brief points from your story.  End each row (Saturday) on a climax of some kind.

Oh, she mentioned.  It really helps with writing synopses.

I was at the point where I would try just about anything new that would help me learn how to write a synopsis.  And don’t talk to me about query letters.  Sheesh.

So I tried it…and it was brilliant.

Putting together a synopsis calendar was just stupid easy.  It made me weed out all kinds of stuff that I babbled about in the earlier versions, and I was able to look at the calendar and how the overall story fit together, how the logic of it went, a lot more clearly.

Here’s stage 1.  I just listed everything I thought was important while scrolling through the story text.  Note:  No high points on weekends, too much stuff.  By the way, don’t read the whole thing if you don’t want to know the ending. 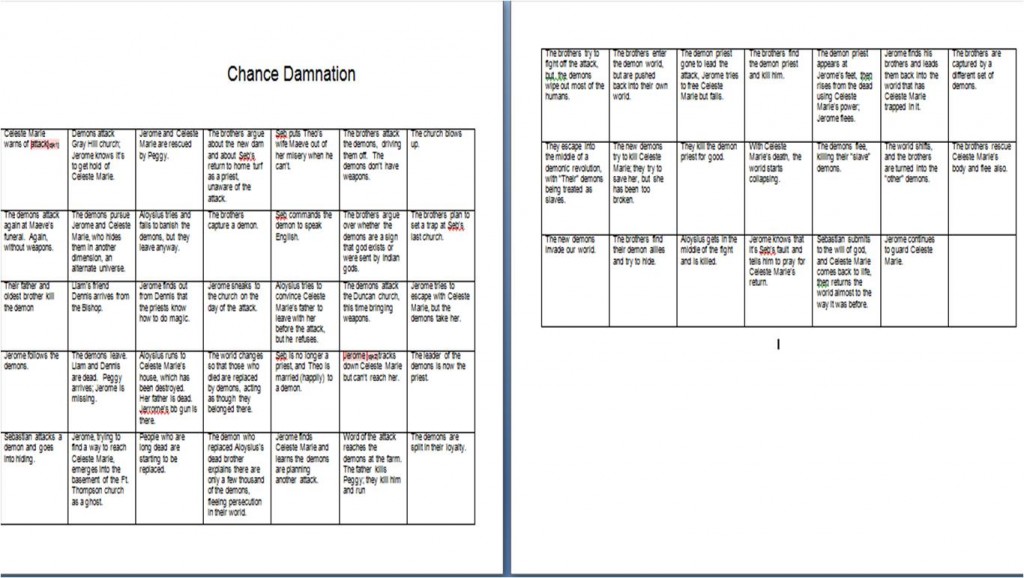 Here’s stage 2.  I condensed the calendar into five weeks (there are months with five weeks, right?  I decided it was close enough) and put high points on Saturdays. 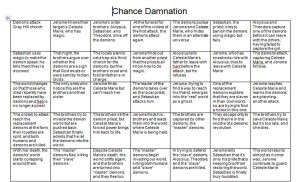 It made me a lot happier, anyway.

When I wrote the synopsis, I looked at the calendar, wrote what it said for the first “day” in complete sentences, added maybe a sentence of explanation if necessary, and moved on to the next “day.”

It may not have been the wittiest synopsis ever (and it’s going to be a tough book to sell regardless), but it got the job done and didn’t leave me cringing, which is far better than what I can usually say about my synopsis efforts.

Queries are even shorter than synopses.  Ugh. I’ve figured out how to write log lines (mostly through trial and error, but that’s a topic for a different day), but queries are a different beast even than log lines.

So, my query plan was thus:  write one “week” on a calendar that covered the same material as a log line, that is, setting up what the main character must accomplish and why it’s important, which is something you usually establish at the beginning of a book, so one week should be about right, right?

I pulled my first week and condensed it down:

Here’s how the “what’s your story about” section of the query letter ended up:

Jerome, the 10-year-old seventh son of a white rancher, knows that his best friend, a fae-like half-blood girl named Celeste Marie, has the power to change the universe; he’s vowed to protect her at all costs. However, when demons attack, the adults around him are too caught up in fighting and questions of what’s happening to believe him until it’s too late. The demons capture Celeste Marie, and the world changes—the demons begin replacing humans, and it’s as though nobody sees anything strange about it except Jerome’s older brothers. While his brothers try to fight the invasion, Jerome must go into the demon’s dark world to rescue Celeste Marie and find out how to return the world to what it once was.

Chance Damnation is an 80,000-word novel about hate, race, and faith.

Again, maybe not the best, most compelling query letter ever, but it’s a world better than what I have been writing, and with a lot less panic, too.

If you have a better way to write a synopsis, I’m all ears!