L is for Illusion 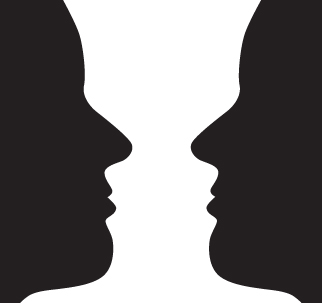 For some reason, while I was out for my run today, I had one of those brilliant flashes of insight that end up sounding kind of lame when approached from a more rational direction.

See what I mean? But let me explain.

When I sit down and write, I have something that happens in my head. I translate this into words. I hope that someone will eventually read it, so I send it out into the world in some form or other. They read it. Something happens in their heads.

Where is the story? On the page or in my/the readers’ heads?

Words are nonsense. That whole “A rose is a rose is a rose” thing by Gertrude Stein is an exercise in nonsense. (For example – say the word “pizza” fifty times. Chances are you’ll have a second or two where the word doesn’t mean anything, it’s just a couple of syllables.)

Words are nonsense out of which our brains make sense, whether there’s any sense there or not.

`Twas brillig, and the slithy toves
Did gyre and gimble in the wabe:
All mimsy were the borogoves,
And the mome raths outgrabe.

Is that sense or nonsense? Lewis Carroll meant something (if you look it up in Annotated Alice you’ll see what), but he didn’t bother to explain it to his readers, although I suspect he might have, to Alice.  But even if you don’t know what the words “mean,” you still try to make meaning out of it, the same way you make shapes out of clouds.

The picture above – is it a face or a vase?

Neither; it’s an optical illusion.  Our brains fill in meaning, but it’s essentially a Rorschach blob.  The picture happens inside our heads – the creator’s and the viewers’.

Writers don’t write stories; we imagine them.  Then we create the illusion of a story with words (pictures, etc.).  If we’re good, we get the readers to imagine very nearly the same story that we imagined.

It’s why some people write every single freaking detail and still can’t write worth a damn.  You can write a photograph, but what the reader “sees” is an Impressionistic painting, or even modern art – even in classic books.  People tend to skim description.

It’s why some people write exactly what happened in their imagination, and the stories suck.  They’re not creating the illusion; they’re recording.

It’s why the writer doesn’t work in a vacuum; good readers are essential.  Not just nice.  Bad readers = sucky story.  (Get a five-year-old to read your intellectual thriller and you’ll see what I mean.)

It’s why a writer doesn’t have to be perfect in order to sell a million books; the story comes from the readers, not the words.  The words are an illusion that we often forgive, when we really want that story in our brains.

It’s why there better be some damned description at the beginning (I kick myself on this), because there is no illusion.

*And movies.  Nothing actually moves.

I’m messing around with my outline and pitch (query letter) for my NaNoWriMo novel this year, because 1) when I’m lost, I want stuff to go back to, as in “tell me why I’m doing this to myself again?” and 2) It takes me a loooong time to write pitches and queries, and I generally am not terribly good at it.

Suki thought she knew her father better than anyone else in the world, better than her crazy mother, better than her best friend or the boy she’s been pretending to have a crush on. Her father always had time to listen to her. He always believed in her, even though she’s almost flunking out of high school. He told her to stand up for what she believes in, no matter what the cost.

Then, after he dies, she finds out that what he believed in made him steal a secret from the Death Goddess, starting a plague of insect-ridden zombies that could kill everyone in Japan. Suki tells her friends that she must call her father back from death in order to stop the plague, but she really just wants him back. At any cost.

Death Watch is a 75,000-word young adult novel that crosses the boundary between manga like Bleach and young adult urban fantasy authors like Holly Black.

What do you think?

I’m a Johnny-come-lately when it comes to zombies.

I’m okay with that, because I tend to see them a bit differently than the people who dealt with them originally; I think zombies are funny, and public tastes seem to be with me at the moment.

Sure, zombies are scary – but they’re funny, too.

People talk about how zombies symbolize the downfall of modern civilization or how we, as a society, are shooting ourselves in the foot in various ways, by a materialistic, corporate culture, or by treating various types of people as less worthy than others.

I see it differently.  Zombies are change.

SCIENCE IS BAD; YOU LEARN STUFF, AND THEN YOU HAVE TO CHANGE.

Or, if the explanation’s not science (and if one’s provided), then the explanation is usually “some fool was messing around with something he shouldn’t have.”

The zombies come, and society is never the same again.  The people you  never thought would hurt you (either because they had no reason to, or because they didn’t have the strength to do it), they’re out for your brains.

And anyone who comes in contact with change, they’re corrupted, so KILL THEM TOO.  Because anyone who changes is stupid and violent, and there are traitors within your midst.

Eulogy for an Accidentally Deleted Story

What does it mean when you’re relieved when you lose a story? When it’s just too much to contemplate reading it again? Let alone editing it? I find I had a hard time dealing with some of my darker predictions. They seemed like simple math, a tale born of the inevitable. Does it mean that I dread the future, because it will be too terrible to want to see? Will people born after now see it as the ordinary, the unexpected? Would that be better or worse?

What does it mean if you’re relieved that you’ve lost a story? When you dreaded having to fix what went wrong with it? You’re glad it’s gone; you won’t make an effort to get it back? You’ made all the decent efforts, but what it comes down to was rewriting the whole damned thing? And you won’t, no matter how many people, inside and out, tell you to do it?

Does it mean you’ve given up?

I did it. I accidentally deleted the draft of a story, then (later) thoughtfully ran Crap Cleaner and deleted my trash before I mailed emailed myself the draft. I have three copies of an empty folder for backup. It’s gone.

Goodbye, story. Like an angry teenager writing bad poetry in a revealing, tacky lace blouse, you were up to no good. But this wasn’t what you deserved.

I have a blog post about story problems up at Apex.  Whee!

Another link to a heads’ up for Choose Your Doom: Zombie Apocalypse.

The author blogs about writing at EdwardGordon.com.

The Dragaeran Community Spreads the Word…

Remember the yummy recipes I posted about Valabar’s feast from Dzur? They’re started to spread.

Short story up at Terrible Minds

A have a flash fiction piece up at Terribleminds, Chuck Wendig’s site, “Vacation Day at Wonderland Simulations.”

Go check it out!

A review of the book is up at Vampire Kisses.

I don’t think it’s possible to have someone say something nicer or more inspiring to keep writing:

“Being an adult you forget how much fun some books can really be.”

Everyone who does National Novel Writing Month is getting ready for it, so it should surprise you, if you follow writers’ blogs, that we’re nattering on about it. What we’re doing, how we’re going to do it. Tips on getting started.  Professional writers are even talking about it.  50K, 30 days.

I remember last year, I saw a couple of pro-level writers write that NaNoWriMo was what professional writers do every month [drinks tea with pinky sticking out, sniffs].  I’m not going to name any names; it was more than one.

Now that I’m freelance writing (with greater or lesser, mostly lesser, success), I can say without a doubt that that’s true and then some.  50K words a month?  Sheesh, I have to do that in ten days sometimes, and frell the weekends.  But here’s me–doing it full-time.  I’m not working a full day, coming home, and then trying to plug in 50K.

Not that I haven’t.  I wrote my first NaNo-style book in June-July 2006.  I just up and decided one day that I was going to do it, and the hell with the month.  Then that November I wrote another one.  I’ve been writing 50K every November since–sometimes registering, sometimes not.

But that first one.  It was like running my first writer-marathon.

It was sloppy, and I didn’t know what I was doing.  But that didn’t make it less.

I’ve just started running (on Saturday).  I’m doing the Couch-to-5K plan.  I’m sloppy.  I don’t know what I’m doing.  I don’t know if I’ll ever run a marathon.  You know who runs marathons?  Regular people, mostly, rather than professional runners.  Does that mean that marathon runners are stupid?  That running a marathon for free is stupid?  Nope.

There are professional runners who eat marathons for breakfast.  There have been a couple of guys who have run 50 marathons in 50 days, like Dean Karnazes and Sam Thompson.  Likewise, there are a professional writers who can drive the rest of us under the table.  Does that make NaNoWriMo or running a marathon any less hard?  Nope.

Those of us who have finished a NaNoWriMo novel, we should be challenging ourselves to either 1) write more words than we did last year or 2) write a better first draft.  After that first marathon, you shouldn’t be taking as much pride in just finishing.  You should be pushing yourself to a bigger challenge.  This year, 75K is my goal, because that’s how long I think the book should be.  I’m writing a YA about a girl who has to stop a plague of zombies by making a bad deal with a Japanese death goddess, somewhere in between Bleach and Shaun of the Dead.

I am dknippling on NaNoWriMo if you would like to add me as a friend.  Put your name and what you might be writing in comments, and I’ll add you back.  Some people don’t need cheer sections, but I do.

And as always, consult your dictionary before beginning a new writing regimen.

*Ever have one of those days when you feel like your pseudonym is writing your regular stuff? I have this pseudo who is so much more positive than I am.  I feel like she’s taking over today.  Worse things could happen.